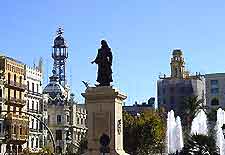 The city of Valencia is overflowing with historical landmarks and monuments, including many grand palaces, ancient stone bridges and a magnificent City Hall (Ayuntamiento). With a rich Roman heritage, the city also boasts a number of ancient Roman remains, with some important treasures excavated around the Plaza de la Almoina.

Other significant landmarks here include the Portal de Valldigna - a historic wall which once surrounded much of the city, the Antigua Universidad de Valencia - the Old University, and the Lonja building - which has become nothing short of a World Heritage Site. 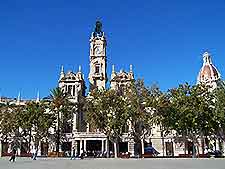 Address: Plaza del Ayuntamiento, 1, Valencia, 46002, Spain
Tel: +34 96 351 0417
Valencia's Ayuntamiento is more of a palace than a city hall and stands in the Plaza del Ayuntamiento, the city's largest square. Dating back to the 18th century, both the exterior and interior of the building are equally grand, with some of the main attractions being a museum and a vast ballroom, which regularly hosts a number of noteworthy events. Nearby are a good selection of bars, restaurants, shops and a popular cinema. The Ayuntamiento de Valencia is where the mascletá fireworks display is held during the Fallas festival, attracting large crowds.
Open hours: Monday to Friday - 10:00 to 13:30
Admission: free

Address: Nave, Valencia, 46002, Spain
Tel: +34 96 386 4100
The historic Antigua Universidad de Valencia is an impressive building, featuring Neo-classical architecture at its finest. With a number of buildings, a cloister area, statues, sculptures and paintings, the university complex is one of the grandest landmarks in the Old Quarter area of the city.
Open hours: Monday to Friday - 09:00 to 20:00
Admission: free 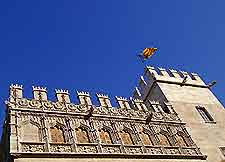 Address: Plaza del Mercado, Valencia, 46002, Spain
Tel: +34 96 352 5478
One of the most eye-catching landmarks in Valencia's Old Quarter, the Lonja building has been awarded the prestigious title of World Heritage Site. Situated in the busy Plaza del Mercado, the Lonja dates back to the late 13th century and is of great historical significance. Attractions at Lonja include a popular market, a central landscaped garden and detailed architecture.
Open hours: Tuesday to Saturday - 09:15 to 14:00; 17:30 to 21:00
Admission: free

Address: Poeta Querol, 2, Valencia, 46003, Spain
Tel: +34 96 351 6392
Known for its magnificent Rococo-style architecture and elaborate attention to detail, the Palacio del Marqués de Dos Aguas was built in the 16th century and has been renovated and restored a number of times over the years. Highlights at this palace include a ballroom, a ceramics museum, sculptures, landscaped gardens and an impressive entrance.
Open hours: Tuesday to Saturday - 10:00 to 14:00, 17:00 to 20:00; Sunday - 10:00 to 14:00
Admission: free 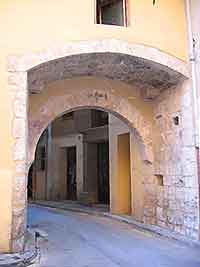 Address: Portal de Valldigna, Valencia, 46003, Spain
Important remains of the city's historic surrounding wall can be found here and are of extreme importance. Dating back to the early part of the 13th century, this section of wall features a stone archway, with pillars either side. Two gateway towers which were once part of the city wall also remain and can be found nearby, the Torres de Quart and the Torres de Serranos.
Open hours: daily - 24 hours
Admission: free

Address: Plaza de la Almoina, Valencia, 46003, Spain
The Plaza de la Almoina stands in the Old Quarter and is an imposing square and a notable archaeological treasure trove, where many important city artefacts have been excavated, including Roman remains. An archaeological site is located nearby, on San Vincente Martir, and offers a wealth of information about this plaza, its history and its uncovered jewels of the past.
Open hours: Tuesday to Saturday - 09:30 to 14:00, 17:30 to 20:00; Sunday - 09:30 to 14:00
Admission: free

Address: Palacio de Justicia, Valencia, 46003, Spain
Tel: +34 96 387 8100
Living up to its title of 'National Historic and Artistic Monument', the Palacio de Justicia was built in the late 1700s and was first used as a marine customs house, and a subsequent tobacco plant. Remodelled in the early 20th century, this magnificent palace features Neo-classical architecture on a breathtaking scale.
Open hours: hours vary
Admission: free