Benidorm Weather, When to Go and Climate Information 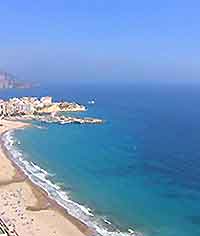 Offering a favourable Mediterranean climate and year-round sunny weather, Benidorm has long been one of Spain's most popular holiday resorts. The fine weather in Benidorm is always a major draw card, together with the scenic coastal setting and sandy beaches.

Situated in the very centre of the Costa Blanca, Benidorm is sheltered by surrounding hills, protecting the area from windy weather from the nearby mountains, creating an individual micro-climate. The Costa Blanca is known for its superb summer weather and mild, temperate climate during the winter months.

Benidorm's spring weather and climate is particularly pleasant, with increasing levels of sunshine and very little rain. Spring is a good time to visit the Costa Blanca, before the busy summer months, with temperatures during April averaging around 19°C / 66°F. 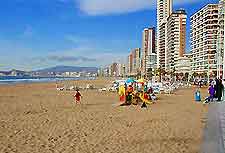 Stretching from May to October, the summer season is long and hot, with easily over ten hours of sunny weather on most days. Temperatures rise quickly in June, peaking at around 27°C / 81°F and even higher in July and August, the hottest months. The summer climate can be humid, although the cool sea breezes are often particularly refreshing. Water temperatures in Benidorm soon reach up to 25°C / 77°F and many people swim in the sea between June and October.

Although temperatures begin to drop in Benidorm as the autumn weather approaches, the climate is still pleasant and mild, with average daytime temperatures in late October hovering around 20°C / 68°F. Benidorm is a year-round resort and remains busy at this time of the year, with cheap hotel packages often available.

The winter weather and climate in Benidorm is much cooler than the summer months, with the coastal temperatures being noticeably warmer than those inland. The winter months still regularly enjoy around five to six hours of sunny weather on most days. December and January are the coldest months on the Costa Blanca, averaging 13°C / 55°F during the daytime, with similar temperatures in the water.