A range of both historic and modern attractions lie close to Benidorm, with many cities, towns and charming villages being just a short distance away. Popular excursions and day trips from Benidorm include the attractions of nearby Alicante - a coastal resort known for its tiled seafront promenade, the seaside town of Altea, the popular resort of Albir, and the village of Calpe - most famous for being home to the Penon de Ifach (Rock of Ifach), an eye-catching natural attraction.

Further afield, many tourists from Benidorm choose to visit the numerous attractions on the island of Ibiza - home to more than 50 beaches and a legendary nightlife, and Valencia - a major city with truly world-class attractions concentrated at the spectacular City of Arts and Science. 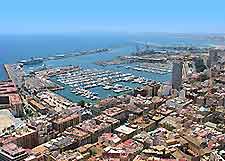 Alicante is around 45 km / 28 miles south of Benidorm and has much to offer in the way of sightseeing and attractions. With its spectacular Explanada de Espana - a tiled seafront promenade, the main beach in Alicante is San Juan Beach, which is linked to the harbour area by regular electric streetcars and often visited by tourists from Benidorm. Other attractions which appeal to Benidorm visitors include the Plaza del Puerto Viejo, which is home to a range of lively shops, restaurants and bars, while St. Barbara Castle (Castillo de Santa Bárbara) overlooks much of Alicante and is an important insight into the area's past.
Visit Attractions in Ibiza - more information about attractions in the Ibiza area. 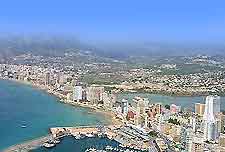 In recent years Valencia has reinvented itself as a world-class tourist destination worthy of the journey from Benidorm, which is around 138 km / 86 miles, taking less than one and a half hours. Valencia is a busy university city, with around 60,000 students, many historical attractions and a population of more than 745,000. In the very centre of Valencia you will find the historic Plaza del Ayuntamiento, the biggest public square in the city. Many people choose to travel from Benidorm just to visit Valencia's inspiring City of Arts and Science, a wonderful contemporary development containing the city's most eye-catching attractions - the Palace of the Arts, the Oceanographic Park, the Prince Felipe Science Museum and also the Planetarium.
Visit Attractions in Valencia - more information about attractions in the Valencia area. 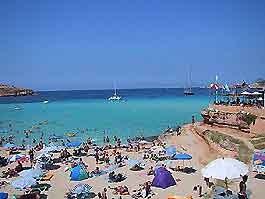 Regular ferries between Benidorm and Ibiza are available, with the island standing around 174 km / 108 miles east of Benidorm and the scenic journey lasting around eight hours. Perhaps best known for its legendary party atmosphere and lively night attractions, there is much more to Ibiza than you might first imagine. One of Spain's most popular Balearic Islands, Ibiza has a population of approximately 110,000 and is home to a 200-km / 125-mile coastline, with over 50 beaches. Other top attractions in Ibiza include old city walls, illuminated caves, an impressive cathedral, and a number of interesting art galleries. Many visitors from Benidorm travel to Ibiza for its excellent selection of recreational activities, which include most water sports, golf courses and hiking.
Visit Attractions in Ibiza - more information about attractions in the Ibiza area.

A particularly beautiful coastal town, Altea is situated around 13 km / 8 miles north of Benidorm and can be reached in around 15 minutes, with a population of approximately 16,000. Full of traditional Spanish charm and character, attractions in Altea include a scenic bay with a backdrop of mountains, a number of pebbled beaches, a charming public square surrounded by cafés and Tapas bars, and a wealth of white-washed houses. Altea is now home to the University of Culture and Fine Arts, a major concert hall and a host of art galleries, all of which have earned it the prestigious title of the 'Cultural Capital of the Valencian Region'.

The small resort of Albir is situated between Altea and Benidorm, with many notable tourist attractions, local shops and a beach, lined by a long promenade. Albir's beach is a popular alternative to those in nearby Benidorm, with a wide range of leisure and recreational attractions available, including playground areas for young children. Central Albir is also home to a central driving range and practice greens.

Perhaps most famous for being home to the Penon de Ifach (Rock of Ifach), a prominent natural landmark, Calpe is a small village close to Benidorm, with a rich fishing heritage. Calpe is a popular day trip for those visiting Benidorm, with attractions including a selection of quiet sandy beaches, a seafront promenade lined with shops and restaurants, a vibrant port area and a regular afternoon fish auction.

An old coastal village standing approximately 7 km / 4 miles from Benidorm, Finestrat has become a notable tourist resort and features a mountainous landscape, offering superb view of the coastline. Other attractions at Finestrat include inexpensive accommodation options, regular craft markets, local restaurants and a peaceful beach with good facilities nearby.

Despite its relatively small site, the village of Guadalest has become a major tourist attraction in its own right. Around 15 km / 9 miles from nearby Benidorm, Guadalest has much to offer. Standing on a picturesque mountain top, much of the village has been carved out of the rock itself. Reached by a winding mountain road, the journey from Benidorm to Guadalest takes in some of the area's most stunning scenery. Guadalest is known for its 16th-century castle, with part of the village only accessible through a tunnel in the actual mountain.

Just 40 km / 25 miles north of Benidorm, the town of Javea contains a number of lush citrus plantations, which are particularly attractive when flowering in the spring. With a population of around 20,000 and a busy port, Javea also features a range of sandy beach attractions - such as the Playa Arenal, together with many historic buildings, the Museum of Archeology and Ethnology and a lively marina district.

The town of Villajoyosa stands around 10 km / 6 miles to the south of Benidorm and can be easily reached along the N-332. Full of traditional Spanish charm and character, Villajoyosa is known for its brightly painted houses, with other attractions including its fishing harbour, local market and scenic sandy beach, which is lined with mature palm trees.