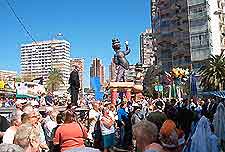 Fiestas and parties are plentiful in the Benidorm area, with an extensive calendar of annual events. The most popular festivals and celebrations in Benidorm include the magnificent carnival festivities in February, the Fallas de San José (Feast of St. Joseph) each March, and the Holy Week processions leading up to Easter.

Also worth noting, the Hogueras de San Juan (Bonfires of St. John), at the end of June, attracts large crowds and features a big bonfire, together with fireworks, while the Benidorm Song Festival in August offers a number of outdoor concerts in the scenic Aiguera Park.