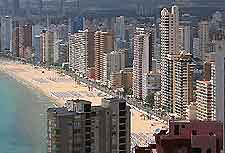 The nightlife in Benidorm is both legendary and endless, with a wealth of entertainment to choose from. Ranging from lively nightclubs and discos around the Avenida de Mallorca, to waterfront restaurants and bars offering outdoor dining areas, Benidorm has it all. Many clubs remain open until the early hours of the morning, meaning that those who like to party all night long will not be disappointed.

Other nightlife attractions here include friendly pubs, clubs with cabarets acts and dancers, and even magic shows. Popular nightspots in the area include the exciting nearby Medieval Tournament, and the extremely popular and highly regarded Benidorm Palace.

Address: Magic Excalibur, between Benidorm and Alfaz del Pi, Benidorm, Costa Blanca, Spain
Tel: +34 96 686 5592
Offering evening entertainment with a difference, the Medieval Tournament is a memorable experience and can be found between Benidorm and the city of Alfaz del Pi, in the Magic Excalibur complex. Combing food and drink with jesters, singers, knights and other costumed-Medieval entertainers, the Medieval Tournament is one of most unusual attractions in the region.
Open hours: daily
Admission: charge