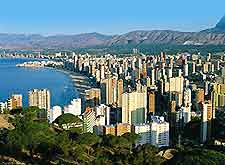 Benidorm has long been one of the most popular and famous tourist resorts in Spain's Costa Blanca region and Benidorm is divided into a number of districts and neighbourhoods. The Old Town district is otherwise known as the Old Quarter (Parte Vieja) and features an endless array of shops, restaurants and cafés, with many al fresco dining areas.

Downtown Benidorm is based around the city centre and is located near to the coastline, with countless prominent hotels and inexpensive apartments available. Nearby, the Levante district is famous for its spectacular beaches, with the neighbouring area of Rincón de Loix offering a range of family attractions. To the west, the Poniente district also features a magnificent stretch of sand, with a range of water sports on offer here. 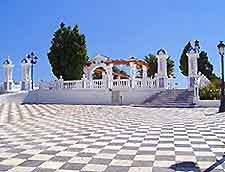 Old Town Benidorm is often referred to as the Old Quarter (Parte Vieja) and is one of area's best places to shopping, with large clusters of boutiques, art galleries and local speciality stores, together with gift shops selling handicrafts and souvenirs. Benidorm's Old Town district is also known for its historic buildings, charming cobblestone back streets and enticing restaurants, taverns and cafés, many of which feature outdoor eating areas on the pavements or surrounding plazas. With churches, white-washed houses and old guest houses, many nearby high-rise towers and hotels are located on the eastern and western sides of the Old Town area of Benidorm. Many of the best Tapas bars in Benidorm are located in and around the Old Town area, being particularly concentrated along the Calle de Santo Domingo, better known as 'Tapas Alley', and the pleasant Passeig de la Carretera.

Also nearby, the Plaza del Castillo is a peaceful spot with cliff-top views, famous for its striking blue-domed church, while l'Aiguera Park is the perfect contrast to Benidorm's sandy beaches, with pathways, colourful flower borders and plenty of shady seating areas on offer.

Leading on directly from Old Town Benidorm, the main city centre is close to the beachfront and is home to a high concentration of reasonably priced hotels and apartment blocks, many of which line the coastline. Central Benidorm is a lively part of the resort and remains busy throughout the year, with many tourists visiting this part of the resort to enjoy the endless facilities, attractions and restaurants, together with the convenient proximity to the beaches. Benidorm city centre enjoys a street-café culture and a vibrant nightlife, with many clubs and restaurants remaining open until the early hours of the morning. 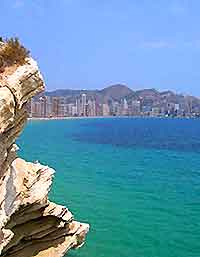 Located to the east of Benidorm's Plaza Santa Anna, the Levante district is best known for its spectacular stretch of fine golden sand, which measures around 2 km / 1.5 miles. This district attracts large crowds, particularly during the sunny summer months, when families and children enjoy the excellent beach facilities and array of water sports, which include water skiing, jet skiing and scuba diving. Parasailing is also often available in this part of Benidorm.

At the back of the beach you will find the Avenida Mare de Déu del Sofratge, a long and scenic promenade with paved walking areas. Outside of the summer season, Benidorm's Levante neighbourhood attracts a slightly older crowd, although there is still a definite lively holiday feel to the area. 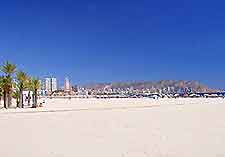 Home to Benidorm's other famous beach, the Poniente district lies to the west of the Plaza Santa Anna peninsula, backed by the Avenida de La Armada Espanola. Best known for its vast stretch of sandy beachfront, Poniente is situated just beyond Old Town Benidorm and tends to be less crowded, with more of a traditional Spanish appeal. Rows of cafés, restaurants, hotels and entertainment venues are within easy walking distance and the western side of Poniente is dominated by the Gran Hotel Bali - a stylish skyscraper situated along the Calle Luis Prendes and the tallest building in Benidorm, measuring 186 metres / 610 feet.

Situated at the far end of the Avenida de Madrid and the nearby Avenida del Mediterraneo, the Rincón de Loix district of Benidorm can be found on the eastern side of Levante. With nearby beach areas and an endless supply of shops and restaurants, Rincón de Loix is a vibrant part of Benidorm, with plenty of recreational activities and attractions for all ages, including a fun fair, miniature golf, excellent international restaurants, inexpensive boutiques and local shops, and hotels with good views and large swimming pools.

Contrasting with the coastal strip on central Benidorm, just a short distance inland you will find a remote landscape, with mountain ranges and small isolated villages and hamlets, standing in the scenic Valencia region. However, nearby Guadalest - around 19 km / 12 miles from Benidorm, is a lively spot discovered by the tourist industry many years ago, reached by a tunnel through the mountain. A popular excursion for visitors staying in Benidorm, Guadalest contains a 16th-century Moorish castle, museums, impressive scenery and a range of accommodation options, including rural guest houses.