Tenerife Weather, When to Go and Climate Information 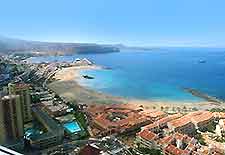 The weather on Tenerife is amongst some of the best on offer around the world and the constant warm climate attracts visitors to Tenerife throughout the year. The coastal areas of Tenerife tend to offer the hottest weather and clearest skies, often with seemingly endless sunshine and only occasional rain.

Southern and western Tenerife are the warmest sides of the island, with the northern side receiving more rain, resulting in lusher, greener growth and dense areas of tropical plantations. The island is full of distinct micro-climates and Mount Teide, Spain's tallest mountain, is just a short drive from the sunny, hot coastline and regularly features snowy weather from around 2,000 metres / 6,560 feet upwards. Tenerife's famous Passat winds, known locally as the 'Vientos Alisios', and surrounding ocean combine to regulate the temperatures even during the sunniest weather, offering a pleasant cooling effect and gentle breezes. 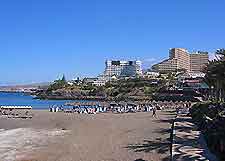 The weather and climate on the island of Tenerife is often described as 'spring-like', with constant warm temperatures year-round and a fresh feeling, due to the pleasant Gulf air currents. Spring is a particularly popular time of the year to visit Tenerife, when temperatures rise slightly from February and March onwards, averaging around 22°C / 72°F.

By April and May, average daytime temperatures hover around 24°C / 75°F, with endless sunny weather and an enormous variety of micro-climates around the island. Many people choose to visit Tenerife during the spring months, to take advantage of both the warm weather and cheaper air fares. 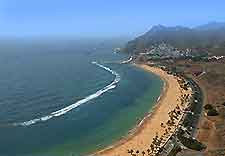 Tenerife's summer season and best weather generally falls between the months of May and October, and this has long been a popular time to visit the island. Although the temperatures are high during the summer weather, peaking in July and August at around 30°C / 86°F, the dry climate is pleasant and not uncomfortably hot. Summer water temperatures are extremely warm at around 23°C / 73°F. Many hotels in Tenerife are not air-conditioned and simply use ceiling fans to create a cooling movement of air.

The winter is the coolest time of the year on Tenerife, although the weather and climate is still extremely mild, retaining a tropical feel. Offering the perfect winter break, with plenty of sunny weather, a warm subtropical climate, a low rainfall, endless stretches of sandy beaches and water temperatures of around 19°C / 66°F, Tenerife's winter months are definitely the island's high season. The months of December and January have average daytime temperatures of around 21°C / 70°F, although night times can often feel much cooler.