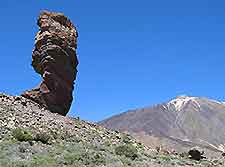 The single terminal contains 12 gates, four levels and a separate inter-island flight zone. The building itself was completed in 2002 and currently serves in the region of 60,000 flights every year. Even though this airport is the second busiest on the island, it only accommodates more than four million passengers annually.

Air Europa and Iberia are the busiest airlines residing at the Tenerife North Airport. The route to Spain's capital, Madrid, is served around 40 times a day during the peak season. Islas Airways and Vueling Airlines are two other prominent commercial carriers operating here.

Address: Los Rodeos, E-38297 La Laguna, Tenerife, Spain
Tel: +34 922 63 58 74
The capital city of Tenerife, Santa Cruz de Tenerife, is only about 11 km / 7 miles east of this facility. The airport, located adjacent to the town of San Cristobal de la Laguna, sits upon the busy TF-5 road, which makes it easy to reach by car, taxi or bus.

The airport is situated off the TF-5, which is the second-largest roadway on the island. San Cristobal de La Laguna (frequently referred to as La Laguna) is within five minutes' drive. Visitors driving from the airport should take the TF-5 directly into the heart of the capital, Santa Cruz de Tenerife. However, drivers should be aware that the TF-5 turns into the Avenue del Tres de Mayo and the Avenue Reyes Catolicos when it reaches the capital. Puerto de la Cruz is also connected via the TF-5.

Four bus lines operate from the airport, taking passengers to various spots around the island, including the capital city. Line 102 and Line 340 transport passengers to the city of Puerto de la Cruz and other spots like Los Cristianos and the Tenerife South Airport, while both Line 107 and Line 108 travel into Santa Cruz. Buses collect their passengers from the ground floor of the terminal, outside the Arrivals hall.

Weekend and nightly rates are more expensive than weekday taxi rates. The taxi rank is found on the ground floor, close to the bus station and next to the Arrivals hall. There are fixed taxi rates from the airport to several towns and cities in Tenerife, including Santa Cruz, Puerta de la Cruz and La Laguna.