The island of Tenerife is part of the Canary islands (Islas Canarias) and located within the Atlantic Ocean. Many thousands of holiday makers flock to the beaches of Tenerife each year, a large proportion of which originate from the Iberian Peninsula.

La Gomera is the closest island to Tenerife and lies to the south-west, while La Palma is slightly further away and to the north-west, and Gran Canaria to the south-east. All of these islands are well connected by regular ferries and flights.

The island is divided into a total of 31 different municipalities, with Santa Cruz de Tenerife serving as the capital city. Santa Cruz is centred around the Plaza Espana, with the majority of sights being no more than a ten-minute walk from this square. Other significant cities and towns include Costa Adeje, La Laguna, La Orotava, Las Americas, Los Cristianos, Los Gigantes and Puerto de la Cruz.

Getting around the island of Tenerife needn't be difficult or expensive, and taxis will take you literally anywhere. However, holiday makers frequently choose to hire a car for a day or week, pickup up some maps and navigate their own way around, from beach to beach. Distances and directions from Santa Cruz are as follows:


Map of the Canary Islands 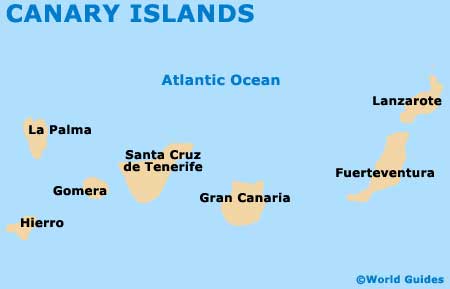