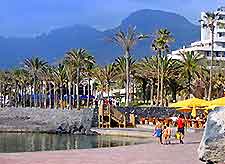 Many of the best museums in Tenerife have become popular tourist attractions in their own right, often celebrating the island's history, with a number of important artefacts and relics being housed in the Tenerife Anthropology Museum.

Address: Calle Fuente Monrales, Santa Cruz de Tenerife, Tenerife, Canary Islands, Spain
Tel: +34 922 209 320
The Natural and Human History Museum in also known locally as the Museum of Man and Nature and is one of the island's most important attractions. Containing many important collections of archaeological treasures and historic artefacts from around Tenerife, the exhibition space was founded to become a central point for this important cultural information, much of which was gathered from small museums. The Natural and Human History Museum also features information and recreations about the life and tribulations of pre-Hispanic man.
Open hours: Tuesday to Sunday - 10:00 to 20:00
Admission: charge, discounts for children

Address: Calle Lomo 9, Puerto de la Cruz, Tenerife, Canary Islands, Spain
Tel: +34 922 535 816
Located in the northern town of Puerto de la Cruz, the Archaeological Museum is home to an impressive collection of ceramics, local documents and maps, and a range of historic Guanche artefacts and memorabilia.
Open hours: Tuesday to Saturday - 10:00 to 13:00 and 17:00 to 20:00
Admission: charge, discounts for students and children, children under three free

Address: Calle León 3, La Orotava, Tenerife, Canary Islands, Spain
Tel: +34 922 321 447
The Ceramics Museum can be found in the town of La Orotava contains the most extensive collection of pottery in the whole of Spain. With clear displays and information in a number of different languages, the Ceramics Museum is known locally as the Museo de Cerámica.
Open hours: Monday to Saturday - 10:00 to 18:00, Sunday - 10:00 to 14:00
Admission: charge, discounts for children