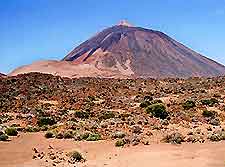 The largest airport in the whole of the Canary Islands, the Tenerife South Airport (Aeropuerto de Tenerife Sur) is located close to the island's southerly towns of Guincho and El Médano. Also referred to as the Reina Sofia, this facility handles predominantly international flights to European cities. It was first constructed in 1978 and is to be found within the southern municipality of Granadilla de Abona.

It has one runway, which measures in at some 3,200 metres / 10,500 feet. The terminal handles scheduled, seasonal and chartered flights to other locations in the Canary Islands and mainland Europe.

Ryanair is the busiest airline serving the terminal. Thomson Airways, Thomas Cook Airlines, Jet2, Air Berlin and Aer Lingus are some of the other carriers that fly to Tenerife's southern airport. Each year, approaching nine million passengers use the facility, where close to 60,000 aircraft movements take place annually.

Address: 38610 Granadilla de Abona, Tenerife, Spain
Tel: +34 922 75 90 00
The airport stands more than 60 km / 37 miles to the south of the capital city, Santa Cruz de Tenerife. The TF-1 is the main highway running along the eastern coast of this Canary Island, connecting the complex with the capital, while the TF-82 allows access to the western side of the island.

Passengers can reach the terminal from any part of Tenerife via main roads. The TF-1 motorway is the largest road on the island and links this southerly airport with Santa Cruz - situated on the north-easterly side of the island, close to La Laguna. Other towns that connect to the airport via the TF-1 include Los Cristianos and Candelaria. In the northern reaches of the island, this road branches off into the TF-5, which ultimately links the Tenerife Airport North.

Route 111 takes passengers north or west of the airport, to destinations like Los Cristianos and Santa Cruz. Route 343 and Route 450 are the other two public buses which passengers can use from the Tenerife South Airport. Of note, the drop-off / pick-up point for buses is sited directly in front of the Arrivals hall.

Taxi ranks are located at the eastern side of the terminal, near the Arrivals exit. Many passengers use the taxi service due to the convenience it offers. However, taxis to the capital of Tenerife can be expensive. Taxis run on two different rates. Weekdays between 06:00 and 22:00 see a cheaper rate than weekends and nights.