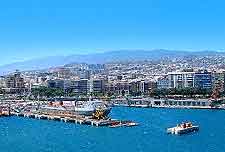 The largest of all the Canary Islands, Tenerife is full of appealing towns, villages and districts, all of which have much to offer. Santa Cruz de Tenerife is the capital of the island and located on the northeastern coastline of the island. A busy city containing many of the most notable restaurants, shopping centres and hotel complexes, Santa Cruz is not to be missed.

Nearby, many of the island's northeastern towns are also worth visiting, particularly La Laguna, which is one of the biggest and most lively towns on the whole of Tenerife. Located nearby, on the northern side of the island, Puerto de la Cruz is a thriving tourist resort, with a selection of superb attractions and beaches, such as the Playa de Jardin.

In the southern region lie many of the island's most popular towns, resorts and coastal districts, such as the Costa Adeje, Los Cristianos and the Playa de las Américas, part of the Arona municipality. With an enormous selection of accommodation, restaurants and shops, water sports are particularly popular in southern Tenerife, particularly along the scenic Playa de las Américas coastline. 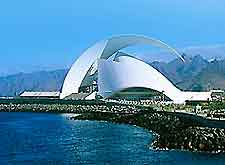 One of the country's busiest cities, Santa Cruz de Tenerife is the island's capital and is often known simply as Santa Cruz. A bustling port city overflowing with top tourist attractions and hotels, Santa Cruz has a population of around 200,000 and features the stunning backdrop of the Anaga mountains, which dominate much of the area. Santa Cruz is located on the northeastern corner of the island and has both the feel and atmosphere of a busy city, containing many high-rise buildings, modern architecture, a stylish opera house and large shopping centres, contrasting with colourful historic buildings and houses. City life in Santa Cruz is centred around the Plaza Espana, which is located on the scenic waterfront, with interconnecting streets and numerous places of interest nearby. Many plazas and tree-lined avenues are perfect for strolling around in the heart of the city.

Home to some of the best tourist attractions on the whole island, highlights in the Santa Cruz de Tenerife area include the Natural and Human History Museum (Museo de la Naturaleza y El Hombre), the Municipal Museum of Fine Arts (Museo de Bellas Artes), and the notable Photographic Gallery (Centro de Fotografia). A number of particularly historic buildings add a more typically Spanish flavour to Santa Cruz de Tenerife, including many painted buildings around the Plaza Iglesia, the 19th-century Teatro Guimerá, the 17th-century Castille de San Juan and the striking Iglesia de Nuestra Senora de la Concepción, which was first built at the end of the 15th century. 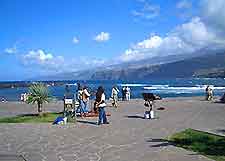 Many of the island's best restaurants and hotels can be found in Santa Cruz, together with exceptional shopping. The Continente Centro Commercial is a major shopping centre on the city's southern side and is home to around 150 different stores. Santa Cruz also offers many of the best department stores available, which include the iconic El Corte Inglés, and branches of both Marks & Spencer and Ikea. Each year in February, Santa Cruz's legendary Carnaval is one of the premier events on Tenerife, attracting enormous crowds to the city, with hotels quickly becoming full booked.

One of the largest towns on the island of Tenerife, La Laguna has a population of around 130,000 and is a vibrant student town, known for its nightlife (marcha) and entertainment options. La Laguna is just 10 km / 6 miles to the west of Santa Cruz de Tenerife and around 22 miles / 35 km from Puerto de la Cruz, both of which are popular day trips. With a range of historic buildings and important architectural attractions, much of the town's 15th-century character remains intact. Today, La Laguna's university is an important part of town life and was founded at the beginning of the 18th century.

Standing around 6 km / 5 miles to the northeast of Santa Cruz de Tenerife, San Andrés is a historic village with a number of notable seafood restaurants. Highlights in and around San Andrés include the remains of an ancient tower, and the Playa de las Teresitas beach, which offers calm waters and fine golden sand imported from the Sahara desert.

The hamlet of Taganana lies on the northeastern side of the island and features some truly breathtaking coastal views. Although Taganana has little to offer in the way of tourism, nearby you will find the magnificent Anaga Mountains - which provide ocean views; the Roque de las Bodegas - offering exceptional surfing and windsurfing conditions, together with a selection of eateries; and the Almáciga area - also known for its superb surfing opportunities.

One of the most important wine regions in Tenerife, both El Sauzal and Tacoronte are home to a number of important vineyards and wineries, supplying much of the island with quality local wines. Of particular interest in El Sauzal, the Casa del Vino La Baranda is an excellent museum celebrating the area's wine production and seasonal harvests. 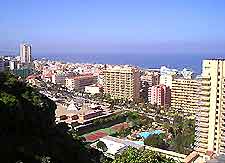 The major highlight of northern Tenerife, Puerto de la Cruz is a busy town with a population of around 32,000. Despite its thriving tourist industry, the town retains much of its traditional charm and appeal. With a picturesque coastline, a seafront promenade lined with palm trees and a range of tourist attractions, Puerto de la Cruz has much to offer those visiting this part of the island. Highlights here include the 18th-century Casa Miranda along the Calle Lonjas - which now houses a popular restaurant; the Casa de la Aduana - dating back to the early 17th century and now containing a range of local arts and crafts shops; and the Archaeological Museum (Museo Archeológico) - home to a collection of historic Guanches artefacts. Without doubt one of the most well-known family attractions in this part of Tenerife is Loro Parque, which is home to an enormous collection of parrots, aquariums with around 15,000 aquatic creatures, the biggest penguin enclosure in the world, and an impressive dolphinarium.

Nearby and to the southeast of Puerto de la Cruz, the colonial town of La Orotava can be found, regarded as one of the most attractive towns on the whole of Tenerife. With many colourful floral displays, cobbled back streets and a number of notable historic buildings, La Orotava exudes a strong Spanish feeling, with highlights including the spacious Plaza Constitución, the simple Iglesia de San Agustin, the Museo de Cerámica and the Hijuela del Botánico gardens.

Famous throughout Tenerife for its ancient dragon tree which grows in the Parque del Drago and is reputed to be around 1,000 years old, the Icod de los Vinos is a small town with a population of around 23,000. Although many people visit this town just to see this enormous botanical specimen, the Icod de los Vinos has more to offer than just one tree, with endless winding streets on a scenic hillside, together with the historic Iglesia de San Marcos and Mariposario del Drago butterfly house.

Also worth a mention, Garachico, in northern Tenerife, is a small village with a population of around 6,000. The main appeal of Garachico is the general lack of tourism, with no high-rise hotels, natural scenery and coastal views. Although Garachico does not feature any beaches as such, the natural rocky coves are perfect for swimming around. 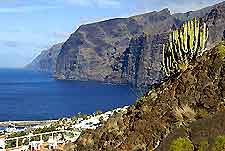 Tenerife's northwestern coast is one of the island's most memorable spots, known for its volcanic beaches and tall mountains. With a natural appearance and rocky coastline, Punta de Teno is a particularly appealing spot and one of the most northwesterly parts of Tenerife. Nearby, Masca is a quiet mountain town which has gained much popularity in recent years, with regular tour buses arriving daily. Featuring impressive and challenging hiking trails, Masca leads to one of the island's most striking natural landmarks, the Cliffs of the Giants (Acantilados de los Gigantes). Los Gigantes and Puerto de Santiago are actually two separate towns which stand alongside each other and are hard to distinguish apart. Both towns have a considerable tourist appeal, with sandy beaches, high-rise coastal hotels, fine dining a plenty, and a range of cruises on offer.

The eastern coastline of Tenerife is connected to the nearby city of Santa Cruz by the TF-1 Motorway, which offers an appealing volcanic landscape along much of the route. Situated around 18 km / 11 miles to the south of Santa Cruz, Candelaria is a small town with a population of around 17,000. A popular day trip with much to offer, attractions in Candelaria include an eye-catching church, the Basilica de Nuestra Senora de Candelaria, which was built in the 1950s and overlooks the coastline. The plaza near to the church is known for its enormous statues of Guanches warriors, while the northern side of Candelaria offers one of the island's best swimming beaches and several hotels. This part of Tenerife is actually a separate town known as Las Caletillas, although it is often classed as part of Candelaria. 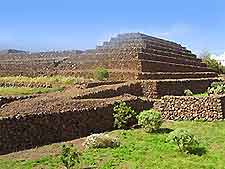 To the southwest and slightly further inland than Candelaria, Güimar is a nearby village, with both rural and ocean views. Home to one of the most striking landmarks on the whole of Tenerife, many people travel to Güimar just to visit the ancient pyramids. Known locally as the Pirámides de Güimar (Güimar Black Pyramids), these ancient structures offer an insight into the ancient civilisations that once lived in this part of Tenerife. A number of notable fishing villages and towns lie close to Güimar, such as Poris de Abona, Puertito, and also Roques de Fasnia - where you will find a quiet black-sandy beach.

Home to some truly exceptional coastlines and world-class surfing conditions, El Médano is situated on the southeastern coast of Tenerife, close to the Playa de El Cabezo. Experienced windsurfers from all over the world travel to the island to experience the waves off El Médano. With a relaxed pace of life and a range of accommodation options, El Médano's main beach is lined by a long boardwalk, providing superb coastal views.

The towns on the southern side of Tenerife are amongst the most popular resorts, including Costa Adeje, Los Cristianos and the Playa de las Américas, incorporating the Arona municipality. With a combined population of around 150,000 people, southern Tenerife is known for its scenic coastline and beaches, which have been refreshed with fine sand from the Sahara desert. Despite being three individual resorts, these towns are generally referred to as one.

Los Cristianos stands in the most southerly location, around 15 km / 9 miles to the west of Reina Sofia Airport (TFS) and was once a small fishing village. Now being greatly developed by the Canary Islands' tourism trade, much of its earlier charm and character still remains. Nearby, Playa de las Américas is a more stylish and glitzy town, with modern high-rise hotels and restaurants along the beachfront, many major shopping centres, entertainment venues and casinos, and popular family attractions suitable for all ages. With some of the area's best beaches in Tenerife, the Costa Adeje is located on the northern side of the Playa de las Américas and offers a superb selection of quality hotels. Noticeably quieter and more reserved than both Los Cristianos and the Playa de las Américas, the Costa Adeje also features a long strip, lined with shopping centres and fine dining, with international cuisine very much the order of the day.

With over 2,800 hours of sunshine each year, the beaches in southern Tenerife have long been the main draw card here, although there are also a good selection of recreational activities and leisure pursuits available. Home to an interesting volcanic coastline, this part of Tenerife is perfect for scuba diving and snorkelling, particularly around the Playa de las Américas coastline, where a dive school offers inexpensive lessons and group dives. Windsurfing and sailing and also popular, with regular catamaran trips around the Costa Adeje waters. Whale watching cruises are also available at the far end of the Playa de las Américas, and around the Puerto Colón area on the Costa Adeje, lasting between two and five hours, where you also often get the opportunity to swim with dolphins.