Getting Around, Zaragoza Travel, Transport and Car Rental 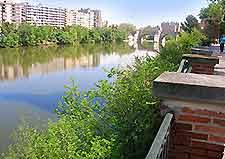 Zaragoza is a busy city with an impressive transport infrastructure. Many visitors to the Zaragoza area choose to travel around by bus and taxi, although renting a car allows you to freely explore Zaragoza and the surrounding towns at your own convenience and pace.

Further methods of travel and transport in the city include the 'Estación Intermodal Delicias' train station, and Zaragoza Airport (ZAZ) - which offers excellent facilities and serves mainly European cities. Much of central Zaragoza is fairly compact and well pedestrianised, allowing you to easily travel and navigate on foot, with popular walking tours available.

Address: Carretera del Aeropuerto (A-120) / Camino de Barboles, Zaragoza, 50190, Spain
Tel: +34 976 712 300
Zaragoza Airport (ZAZ)is located just 10 km / 6 miles to the west of central Zaragoza and serves a number of large European airlines, including Air Europa, Iberia Air, Iberworld Airlines and Ryanair. Flights from Zaragoza Airport regularly travel to numerous major cities around Europe, including flights to Madrid, Barcelona, Frankfurt and Palma de Mallorca. A selection of ground transport is available at the airport, with buses, taxis and airport shuttle buses, which travel to and from central Gran Via. Car rental transport companies are also available at Zaragoza Airport and include Avis, Europcar and Hertz. 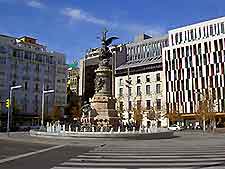 Tel: +34 902 422 242
Renting a car has long been one of the most popular types of transport for those visiting Zaragoza, offering the freedom to travel where and when you like. Zaragoza is surrounded by many major roads and highways, including the AP-2, the A-23, the A-68, the N-125, the N-232 and the N-330, all of which make travelling and exploration of the surrounding countryside and towns simple. All roads are well sign posted and most routes both to and from Zaragoza are usually easy to navigate, even to Madrid, which is around 314 km / 195 miles from Zaragoza and can be reached in approximately three hours. 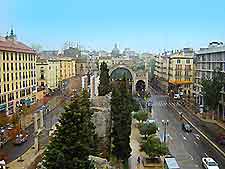 Zaragoza has more than ten separate bus lines spread around the city, with the main bus transport station being the Agreda Automovil, located along the Paseo de Maria Agustin. 'ALSA' operates regular buses which travel to and from Madrid in less than four hours. Further buses travel daily from Zaragoza to Huesca (one hour), and Jaca (two and a quarter hours). A number of Zaragoza buses also travel to Badajoz, León, Mérida, Soria, Taragona and Valencia. The main bus stations in Zaragoza include:

A selection of taxis can be found at Zaragoza Airport, outside of the main arrivals hall, providing a convenient way to travel into the city, with the journey taking no more than 15 minutes. Further taxis and taxi ranks are located around the city centre, although taxis can also be hailed directly from the street when in service. 'Tourist Taxis' are also on offer in Zaragoza and offer an intimate guided tour of the city, with two different routes and audio commentary in a variety of languages.