Zaragoza contains a surprising number of tourist attractions, with something for all ages. One of the most popular family tourist attractions in Zaragoza, the Parque de Atracciones is a notable amusement park, with many fast rides and water slides.

The University of Zaragoza is another popular tourist attraction and contains a number of historical buildings and features.

Some of the most scenic tourist attractions in Zaragoza include the Imperial Aragon Canal and the River Ebro, both of which offer appealing walking trails, while for more traditional Spanish entertainment, the Misericordia Bullring hosts a range of events throughout the year.

Address: Cerbuna, Zaragoza, 50009, Aragon, Spain
Tel: +34 976 76 1000
Covering a vast area in Zaragoza's La Romareda district, the University of Zaragoza is highly regarded throughout Spain, dating back over 400 years. The vast complex features a number of different faculties, historic buildings, excellent modern facilities and a lively nightlife nearby. With in excess of 40,000 students each year, the university has long been an important part of city life, attracting many visitors each year.
Open hours: daily
Admission: free 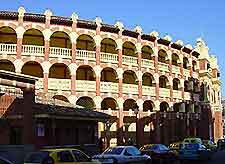 Address: Pignatelli, 87, Zaragoza, 50004, Aragon, Spain
Tel: +34 976 43 2381
Whatever your feelings towards Spanish bullfights, the Misericordia Bullring is an important piece of 18th-century architecture in its own right. Holding more than 10,000 spectators, the bullring hosts a number of events and attractions throughout the calendar and has been modernised in recent years.
Open hours: hours vary according to event
Admission: charge

Address: Rio Ebro y El Burgo, Zaragoza, 50006, Aragon, Spain
This scenic canal was directly responsible for much of Zaragoza's considerable wealth during the 18th century, being used to irrigate the surrounding farmland. With walking trails and views of both the surrounding and countryside, the Imperial Aragon Canal stretches for more than 62 miles / 100 km.
Open hours: daily - 24 hours
Admission: free 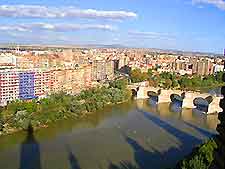 Address: Plaza del Pilar, Zaragoza, 50003, Aragon, Spain
The River Ebro meanders through the city and gives the Zaragoza great character. One of the longest rivers in the country, the River Ebro offers a number of walking trails and is crossed by five large bridges. Throughout the year, the river features a range of recreational activities, including boat trips. Of great historical importance, the river has been heavily used over the years, especially during Roman times.
Open hours: daily - 24 hours
Admission: free