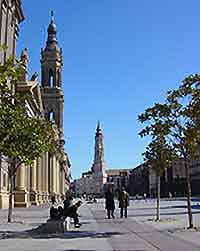 Zaragoza is a busy and lively city, split into several notable regions, with the principal districts being Old Town (Casco Histórico), Downtown (Zona Centro) and the vibrant University Delicias district. Much of life in Zaragoza is based around the Old Town district, where many of the city's most historic attractions can be found.

Featuring a number of spacious parks and gardens, the downtown district is home to the Gran Via, a major thoroughfare in this part of the city.

Also worth a mention is the exciting district based around Zaragoza University (Universidad de Zaragoza), where you will find an endless selection of restaurants, bars, nightclubs and other entertainment options.

Old Town Zaragoza is the historic city centre and contains many of the area's most significant buildings and notable landmarks. Edged by the Ebro River to the north, the Old Town district was once the centre of city life and the former walls are outlined by both the Calle Coso and the Avenida de César Augusto. Many of the city's top attractions and sights lie within this district, together with a high concentration of restaurants and bars, hotels, shops and churches. 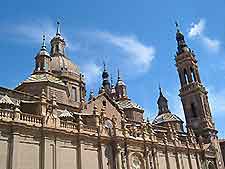 Highlights with this part of Zaragoza include the Puerta del Carmen - the old city gate, and the city's two stunning cathedrals - the Basilica del Pilar (El Pilar Cathedral) and Catedral del Salvador (La Seo Cathedral), which dominate much of this district and share equal cathedral status. To the south of these historic buildings, the Plaza del Pilar is a vast public space and is still considered to be the very heart of Zaragoza. A number of other additional plazas and alleys are situated nearby, particularly around the Calle Coso and off the nearby Paseo de la Independencia, with this area being known locally as 'El Tubo'. Many shops and cinemas are located off the Paseo de la Independencia, which is a notable promenade.

With wide boulevards and stylish shopping districts, Zaragoza city centre has a definite feeling of wealth and prosperity, featuring a good selection of well-placed, reasonably priced accommodation. Much of downtown is centred around the Gran Via, a major avenue which dates back to the 1920s and is lined with mature trees, heading south towards Valencia.

Nearby you will find a number of notable of green spaces, including the spacious Miraflores Park (Parque Miraflores) off the Avenida Cesareo Alierta, and to the southwest, Zaragoza's Pignatelli Park (Parque Pignatelli), which can be found along the Paseo Cuellar. Both parks offer quiet spaces to stroll and relax, with pathways and shaded seating areas.

Based around the Universidad de Zaragoza, this lively district is full of entertainment options, outdoor coffee shops, bookstores, pubs and eateries, particularly around both the Calle Tomás Bretón and the Calle Corona de Aragón streets. Dating back to 1542, Zaragoza University is home to more than 20 different facilities and almost 40,000 students. Known for its lively nightlife, many clubs and restaurants are concentrated around the vast university campus, often staying open until gone midnight.