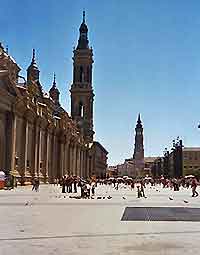 Offering an insight into the past of Zaragoza, the city's many museums are overflowing with relics, artefects and archaeological finds. Celebrating the rich history and heritage of the area, some of the main cultural attractions in Zaragoza include the Palaeontology Museum (Museo Paleontológico), and the New Tower Museum (Museo de la Torre Nueva).

For those wishing to delve into the Roman history of the city, the Caesaraugusta Roman Baths Museum, the Forum of Caesaraugusta Museum and the Roman Port Museum are not to be missed.

Address: San Juan y San Pedro, Zaragoza, 50001, Aragon, Spain
Historic remains of the city's ancient Roman baths can be viewed at this museum, which include a number of artefacts and relics found onsite. The museum also features a detailed scale model, showing the original layout of the baths as they were almost 2,000 years ago.
Open hours: Tuesday to Saturday - 10:00 to 14:00, 17:00 to 20:00; Sunday - 10:00 to 14:00
Admission: free

Address: Plaza San Bruno, Zaragoza, 50001, Aragon, Spain
Full of historical remains of the ancient Roman River Ebro harbour, once an important part of life in Zaragoza, this museum contains many important archaeological treasures. Highlights at the museum include an audio-visual presentation and many well-preserved finds.
Open hours: Tuesday to Saturday - 10:00 to 13:00, 17:00 to 20:00; Sunday - 10:00 to 14:00
Admission: free

Address: Torre Nueva, 29, Zaragoza, 50003, Aragon, Spain
Tel: +34 976 29 8998
The Museo de la Torre Nueva remembers Zaragoza's ancient Torre Nueva tower, which was built in the early 16th century and demolished at the end of the 19th century when it became unstable. Once a major landmark in the Old Town area, the museum features an extensive collection of photographs and paintings of the tower, together with a number of artefacts.
Open hours: Monday to Saturday - 11:00 to 14:00, 17:00 to 20:00
Admission: free