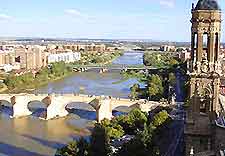 With a rich Roman heritage and many notable landmarks and historic buildings, Zaragoza is a major Spanish city. During the 16th century, Zaragoza was actually bigger than Madrid and as a result, is full of magnificent architecture, with some of the main landmarks including the Ayuntamiento (Zaragoza City Hall), the Archbishop's Palace and the Torrero Palace.

Other top landmarks and monuments in the Zaragoza area include the 15th-century Puente de Piedra bridge, the Puerta del Carmen gate and the Murallas Romanas, ancient remains of Roman Walls which once surrounded central Zaragoza. 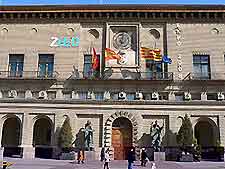 Address: Plaza del Pilar, 18, Zaragoza, 50003, Aragon, Spain
The Ayuntamiento is one of Zaragoza most notable landmarks and famous throughout the city. With grand architecture and stone statues, the building is equally impressive inside and regularly flies a number of Spanish flags from the balcony. Dating back to the mid-20th century, Zaragoza City Hall can be found in the city's Casco Histórico area.
Open hours: Monday to Friday - 08:00 to 15:00
Admission: free 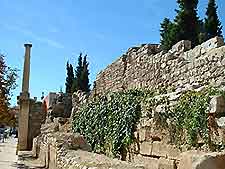 Address: Avenida César Augusto, Zaragoza, 50003, Aragon, Spain
Tel: +34 976 39 3537
An important part of Zaragoza's history and heritage, the ancient Roman Walls once surrounded the central part of the city and measured around 2 miles / 3 km, with numerous towers, lookout points and a number of main gates. A small section of the wall remains and can be found in the city centre, alongside the eye-catching statue of Augustus.
Open hours: daily - 24 hours
Admission: free 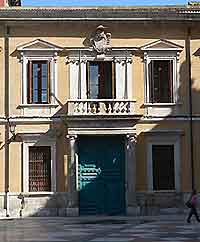 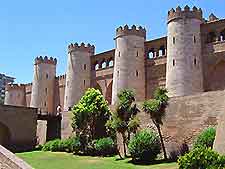 Address: Diputados, Zaragoza, 50004, Aragon, Spain
Tel: +34 976 28 9683
The Palacio de la Aljaferia is a spectacular Muslim palace, which dates back to the 11th century and features eye-catching architecture. Without doubt one of the city's most important historical landmarks, the palace contains many original features and is the regular meeting place of the Aragonese parliament.
Open hours: daily
Admission: charge

Address: Coso, 1, Zaragoza, 50001, Aragon, Spain
With twin towers and an impressive façade, the Palacio de los Condes de Morata stands in the centre of Zaragoza. Built in the 1500s, this important palace contains many period features, and whilst not open to the public, the scale and beauty can be easily appreciated from the outside.
Open hours: daily - 24 hours
Admission: not open to the public 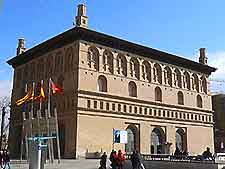 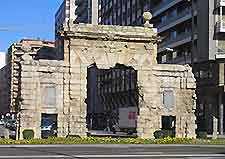 Address: Paseo Pamplona, Zaragoza, 50004, Aragon, Spain
The last remaining city gate, Puerta del Carmen was once one of eight gates in the 1700s and is situated on the southern side of Zaragoza. The other seven gates were sadly destroyed during wars, historic disputes and restructuring of the city over the years.
Open hours: daily - 24 hours
Admission: free

Address: Plaza Santa Cruz, Zaragoza, 50003, Aragon, Spain
A magnificent palace in Zaragoza's Casco Histórico district, the Palacio de los Torrero has been restored and renovated a number of times over the years, after it was completed in the 16th century. With Renaissance-style architecture, the Torrero Palace is now home to the main offices of Aragon's Official College of Architects.
Open hours: Monday to Friday - 08:00 to 15:00
Admission: free