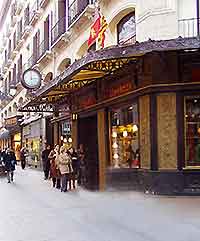 Zaragoza is a major city and has much to offer in the way of shopping, with most central streets being lined with 'shopportunities', including local stores, boutiques and gift shops. One of the main shopping districts stretches from the Residencial Paraiso area of Sagasta to the bustling Plaza de Espana square, which is surrounded by a mixture of large shops and small speciality stores, often housed in characterful old buildings.

Other notable districts in Zaragoza include the areas around the San Ignacio de Loyola and the Francisco de Vitoria, with many appealing shops being located on the intersecting streets. The Plaza del Pilar also offers a range of shops, including a number which specialise in religious souvenirs for tourists.

For those looking for more traditional and authentic shopping in Zaragoza, head to the city's popular street markets, such as the Lanuza Market, where inexpensive local produce is plentiful. Also on Sundays, a bustling flea market can be found around the stone arches of the Misericordia Bullring (Plaza de Toros de la Misericordia). 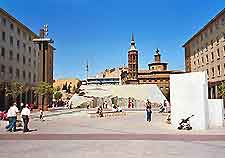 Generally, most shops in Zaragoza open between 09:00 to 10:00, remaining open until as late as 20:00. However, shopping tends to come to an abrupt halt during the afternoon siesta time, when shops close for around three or four hours, between 13:00 to 17:00. Hours are often reduced on Saturdays, although the larger department stores, such as El Corte Inglés, remain open Monday to Saturday from 09:00 to 21:00. The majority of local stores do choose to close on Sundays, although some pharmacies are usually open, together with a number of gift shops.


Alcampo
Address: Plaza de Utrillas, 6, Zaragoza, 50013, Aragon, Spain
Tel: +34 976 59 8498
Alcampo is an enormous hypermarket, situated in the city's historic Utrillas train station. With a seemingly endless array of inexpensive goods of offer, further Alcampo outlets can be found on the outskirts of Zaragoza.

Centro Comercial Gran Casa
Address: Avenida Maria Zambrano, 35, Zaragoza, 50015, Aragon, Spain
Centro Comercial Gran Casa is a popular shopping centre and one of the largest in the city. Home to more than 150 shops of all descriptions, including a branch of the famous El Corte Inglés department store, the Gran Casa also features a good selection of restaurants, bars, a multi-screen cinema and tenpin bowling alleys.

Centro Independencia
Address: Avenida de la Independencia, 24-26, Zaragoza, 50004, Aragon, Spain
Situated in central Zaragoza, the Centro Independencia is constructed in an usual spiral design, meaning that stairs are not required to access the different levels of shops. Visitors can expect to find in excess of 100 outlets, together with cinemas, restaurants, cafés and bars.

Mercado Central (Central Market)
Address: Avenida César Augusto, Zaragoza, 50003, Aragon, Spain
Dating back more than 100 years, the historic Mercado Central lies in the centre of Zaragoza and is open from Monday to Saturday. Full of colourful characters, local market banter, souvenirs and genuine bargains, a trip to the Central Market is a memorable shopping experience.