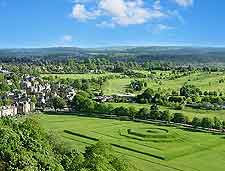 Stirling is one of the most scenic and engaging cities in all of Scotland. Situated right on the boundary between the Scottish Lowlands and the Highlands, within Central Scotland, this ancient burgh has a wealth of things to do and see for visitors.

Straddling the Forth River, Stirling is a fascinating small city and is often described as being the 'Gateway to the Highlands'. The city is centred around an Old Town district, with winding cobblestone alleyways and streets, and a large imposing fortress dating back to the early part of the 12th century, when King David I made Stirling a royal burgh.

Tourism is a major part of life in this city, so you will have no trouble finding all the amenities you need. The Stirling Tourist Information Centre on Dumbarton Road, close to the Thistles Shopping Centre, has excellent brochures and helpful staff who will point you in the right direction. 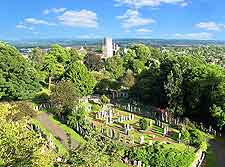 A walk around the medieval town wall is the perfect way to acquaint yourself with Stirling and its tourist offerings, with the 'Back Walk' being especially popular with sightseers. Guided bus tours are also on hand, while a simple stroll around the Old Town will reveal attractions such as the Mercat Cross, the Tolbooth and the Mar's Wark - a ruined townhouse with Renaissance-style architecture, built for the Earl of Mar in 1570.

A look around the 19th-century Old Town Jail is always a lot of fun, with its costumed actors leading you around and finishing up with some outstanding rooftop views. At the Bannockburn Heritage Centre, a National Trust for Scotland attraction, you can learn all about King Robert the Bruce's unexpected victory at the 1314 Battle of Bannockburn. 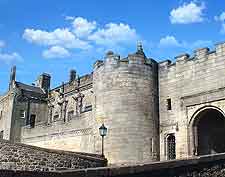 On a sunny day, families will enjoy simply hanging out at the King's Knot, with this formal garden being landscaped almost 400 years ago and boasting ornamental hedges and mature topiary. More information about Stirling Tourist Attractions.

Many of the most significant properties around the city are owned and managed by Historic Scotland, such as Stirling Castle, the city's most famous and obvious landmark. This elevated fortress was once a royal palace used by the likes of Mary Queen of Scots, and thanks to an enormous renovation project in recent years, the Renaissance-style architecture has never looked better. 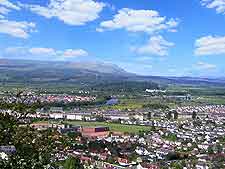 Close by, the 17th-century townhouse named Argyll's Lodging may also be of interest, with its turret fortifications and sumptuous decor.

Tourists on holiday planning a day of history may like to consider visiting the hilltop National Wallace Monument, Cambuskenneth Abbey and the 16th-century Old Stirling Bridge, where in 1745, the southern arch was blown up to stop the Jacobite army crossing the bridge. The Church of the Holy Rude and its fascinating royal history is another place of interest, as is the Cambuskenneth Abbey, near to the Forthbank Stadium. More information about Stirling Landmarks and Monuments. 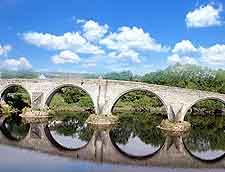 There are a few museums of note in the city, offering information for those interested in learning more about Stirling's past events and conflicts. Residing at the castle since 1988, the Argyll and Sutherland Highlanders Regimental Museum should be your first port of call, with its wealth of regimental memorabilia, such as medals, uniforms, paintings, stories and important documents.

Just beneath the castle and next to the city's golf club, the Stirling Smith Art Gallery and Museum is called home by many intriguing collections, such as landscape paintings and portraits, pewter pieces and a football made from a pig's bladder more than 450 years ago. Paintings and sculptures of a contemporary nature are exhibited at the Changing Room gallery, and at the city's university, the Pathfoot Concourse Gallery comes with an appealing sculpture garden. More information about Stirling Museums. 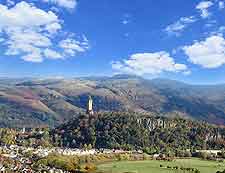 Enjoying a strategic location in Central Scotland, Stirling is the perfect jumping-off point for Scottish excursions, with both Edinburgh and Glasgow, Scotland's two biggest cities, being roughly one hour away and well connected by road. Dundee is another noteworthy Scottish city and is slightly further away, with its Cultural Quarter a highlight.

Considerably closer to home are the towns of Bridge of Allan, Callander, Dollar, Dunblane and Falkirk, the latter of which is where you will find a state-of-the-art rotating boat lift (the Falkirk Wheel), linking two canals and replacing the previous 11 locks. A trip on the Bo'Ness and Kinneil Railway may also appeal, or perhaps an outing to Loch Lomond and the Trossachs National Park. Campsie Fells is an additional day trip possibility, as are the attractions within Balquhidder, Clackmannan, Fife, Kinross, Loch Leven, Perth, Strathblane and Strathearn. More information about Stirling Attractions Nearby. 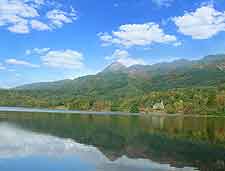 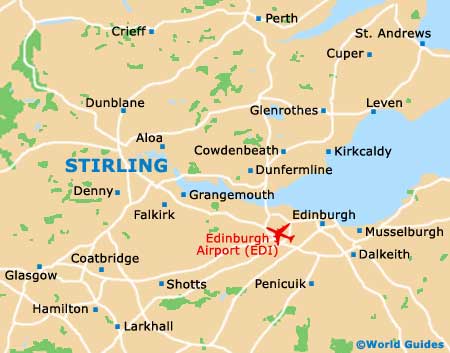