Lying within the Tuscany region, close to the western coast of Central Italy (Tyrrhenian Sea), the city of Pisa stands alongside the Parco Naturale di Migiarino San Rossore e Massaci. Pisa is a small city, and so finding your way around is unlikely to present any problems.

The Stazione Centrale (Central Train Station) sits on the southerly side of Pisa and is a useful reference point. Close by, the Piazza Sant' Antonio is home to the busy intercity bus station. Next door, the tourist office located on the Piazza Vittorio Emanuelle II is a good source of maps, leaflets and glossy magazines.

Pisa has grown up around the River Arno and many interesting sites lie along in banks. The Piazza Sant' Antonio is located on the southern side, while just a short distance to the north (across the Arno) is the Piazza dei Miracoli and its world-famous Leaning Tower, as well as the Cathedral and Bapistry (Battistero). 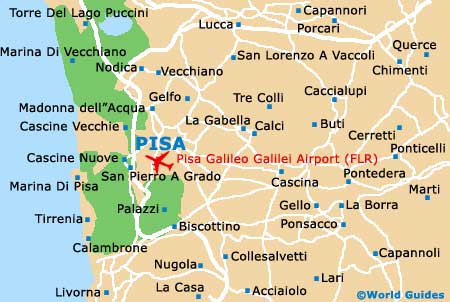