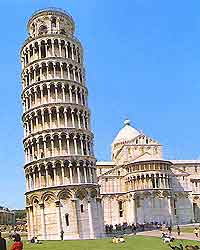 Synonymous with Italy, the Leaning Tower of Pisa (Torre Pendente) is known throughout the world. This slender tower is actually the bell tower of the Pisa cathedral and when visiting, it is hard to understand how it has remained standing after more than 700 years.

There are other medieval towers in Italy that have failed to keep upright, but it is the Leaning Tower of Pisa that has captured the world's imagination. The tower has always tilted and nobody ever put his or her name to it, and so who was to blame for this architectural mishap remains a mystery.

The underlying cause of the tremendous leaning is due to a sand foundation to one side of the base. For literally centuries, Italian engineers have been coming to Pisa to try and overcome the lean, in the fear that the Leaning Tower might collapse completely one day. 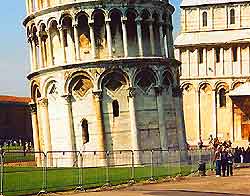 Construction started in 1173 and when the builders reached the third level in 1185, they noticed that the tower has started to subside and was leaning slightly - around 4 cm / 1.5 inches. Masons inserted wedge-shaped stones to correct the problem, but this only made the tower start to tilt the other way. At a loss as to what should be done, worked halted for almost a century. Work resumed in 1275 and after much calculation and discussion, a further three uneven storeys were added, tilted in an attempt to counterbalance the lean, giving the tower its slight 'banana' shape.

Finally in 1350 a lopsided Gothic belfry was added at the top, making the Leaning Tower of Pisa stand at 51 metres / 170 feet tall. A couple of centuries later Galileo used the extreme overhang to demonstrate the constancy of gravity, by dropping different weighted balls of the same size. 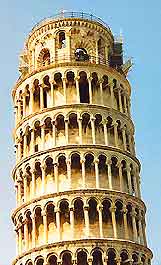 In the mid-19th century, an ill-advised attempt to correct the southerly lean involved digging a trench all the way round the base of the tower and this only managed to make things much worse. Also, the lowering of the water table throughout the 20th century managed to bring the structure to the edge of a crisis.

By 1990, the top leant more than 5 metres / 16 feet from vertical and the Leaning Tower of Pisa was finally declared off-limits to visitors. Since then, engineers and scientists have joined forces, but in 1991, their attempts to prevent any further leaning by adding steel bands around the lowest storey caused the tower to shift even further. Finally, a decision was made to stabilise the structure by adding some 800 tonnes of lead weights to the northern side, and this proved successful.

In 1995, engineers began to drill down beside the Leaning Tower of Pisa to improve the foundations and overnight this caused the tower to lurch ever further. Steel cables were added in 1998, stretching from the counterweights on the north side of the square, to hold the tower steady. Finally, rotating drills removed small amounts of silt and sand from selected areas of the foundations and the tower's reactions were scrutinised. At last the Leaning Tower of Pisa began to correct its lean and settle into its 1870 position. Work is still continuing to improve the angle, but the tourist board have insisted it should always remain leaning.