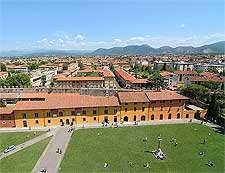 Pisa has ancient origins in history, which are thought to have begun around the 8th century BC as a small Etruscan settlement. From around 30 BC, the settlement grew into a Roman colony known as Pisae. As a Roman city, it enjoyed much success, mainly because of its strategic location and the area's abundant natural resources. The Romans built Porto Pisano, which served to strengthen its links with maritime trade.

From the decline of the Roman Empire through to the 9th century AD, Pisa came under repeated attack. Later, its attackers were Byzantines and Saracens. The city survived, however, retaining control of its territory through a succession of trade agreements and land deals.

History from the Middle Ages Onwards

In medieval times, Pisa was a wealthy place. Its thriving economy was largely based around its busy port. Indeed, it was one of Italy's four maritime republics, along with Genoa, Venice and Amalfi. Like many other towns and cities in Europe, Pisa was keen to show off its economic success in the form of ambitious building projects.


The city's cathedral was consecrated by Pope Gelasius II in 1118. Work began on the city's infamous Leaning Tower in around 1173. Within the first five years, the tower began to sink because it had been built on unstable foundations. In the 1270s, more upper floors were built to try to compensate for the lean. 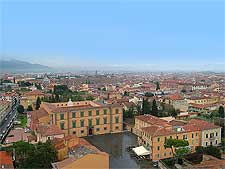 By this time, the city's wealth had started to decline and along with it went its power and status. During the first half of the 13th century, Pisa was involved in frequent skirmishes with the city of Florence. Then, in 1284, at the Battle of Meloria, it suffered a significant defeat to Genoa. Many of the city's ships were lost, along with thousands of men. Pisa was never to fully recover. Its history was further marred by internal fighting between various factions who vied for control in the city. In 1293, Guelph forces invaded a much-weakened city,

In Dante's 'Divine Comedy', the Count Ugolino della Gherardesca became the Lord of Pisa, even though he was accused of treachery at Meloria. His notoriety earned him a prison cell in the Gualandi Tower in the city. Legend has it that he ate several members of his family before dying.

By the 14th century, little had changed - the city was still a place of turmoil and violence. Then, in 1406, the Florentine army took control. From the late Middle Ages, Pisa acquired a reputation as a place of learning and culture. A university was founded in the city. In 1589, Galileo Galilei moved to Pisa to teach mathematics here. For the next three years, he carried out his famous experiments to unravel the mysteries of gravity by dropping objects from the Leaning Tower. 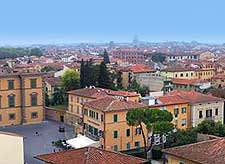 History from the 18th Century to the Present-Day

In the 18th and 19th centuries, the tower's lean grew worse. Many attempts were made to try to remedy the problem. Gradually, the tower proved to be less of a problematic building and more of a tourist attraction.

During World War Two, Pisa was badly bomb damaged. In recent times, the city has been restored, with most of its historic buildings still well preserved. In 1990, work began on strengthening and preserving the Leaning Tower of Pisa.