Whilst it is fair to say that the Leaning Tower of Pisa does rather steal the limelight from many of the city's tourist attractions, do allow time to properly explore all that this enchanting city has to offer. First on your itinerary should be a visit to the Baptistery (Battistero), which ranks amongst Italy's finest and is quite simply enormous.

Tourists will find that further enticing attractions within Pisa include both the Holy Field (Camposanto) and the Knights' Square (Piazza dei Cavalieri), which is overflowing with medieval character. The Piazza dei Cavalieri is rather dominated by the Palazzo dei Cavalieri, which was originally the headquarters of the Tuscan Knights of St. Stephen and boasts an elaborately decorated facade.

Daily walking tours are popular and take in many of the city's most interesting attractions and landmarks. This provides an interesting and insightful way to visit some of the city and provides a chance to learn about Pisa's wealth of history. 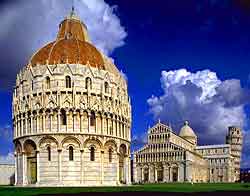 The circular Baptistery in Pisa is the largest of its kind in the whole of Italy, with a circumference of 104 metres / 348 feet. Situated near to the Duomo, building commenced in 1153 by Deotisalvi, who was responsible for giving the building its famous lower Romanesque-style drum and left his name on a column by the door. More than 100 years later, it was worked on further and the upper part was created in a rather Gothic style and a large dome was added shortly after. The vast interior is fairly plain and features one of the first great Pisano pulpits, sculpted in 1260 by Nicola Pisano and a massive, carved font. Many of the original statues and decorative pieces are now house in the Museo dell'Opera del Duomo and some have been replaced by casts. One of the most interesting features in the Baptistery is the simply astonishing acoustics, which echo around the interior. To enjoy these wonderful acoustics it is worth arriving early in the morning, before the building gets too busy. When a choir sings in the Pisa Baptistery it is memorable to say the least. There are stairs to the upper gallery and more stairs leading into the grand dome itself.
Open hours: April to September - 08:00 to 19:40, March and October - 09:00 to 17:40, November to February - 09:00 to 16:40
Admission: charge 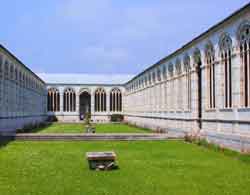 Address: Piazza del Duomo, Pisa, Italy
Tel: +39 (0)50 560 547
The monumental cemetery of the Camposanto in Pisa is a large, walled structure situated to the north of the Duomo. It was created in 1278 to house shiploads of holy soil, brought back from the mount where Christ was crucified and is without doubt one of the most beautiful cemeteries in the world. In 1944 the cemetery was heavily bombed and the wooden roof caught fire. The lead panels melted and ran over many of the frescoes, damaging and destroying them. When the damaged frescoes were removed, workers found the original sketches underneath and these are now displayed in the Museo della Sinopie. Remaining notable frescoes include the 14th-century 'Triumph of Death' and the 'Drunkenness of Noah'. Also of interest is a 2nd-century BC Greek vase that has inspired many sculptors in Pisa over the years.
Open hours: April to September - 08:00 to 19:40, March and October - 09:00 to 17:40, November to February - 09:00 to 16:40
Admission: charge

Address: Via L Ghini 5, Pisa, Italy
Tel: +39 (0)50 561 795
Located in the centre of Pisa, just a couple of minutes walk from the tower, these beautiful botanic gardens were founded in the 1540s and are the oldest botanical gardens in the whole of Europe. Full of an enormous collection of mature specimens from all over the world, the gardens are now part of Pisa University and offer a tranquil place to relax, right in the heart of the city. Guided tours are available and outdoor theatrical pieces for children and adults are performed in the summer.
Open hours: Monday to Friday - 08:00 to 13:00 and 14:00 to 17:30, Saturday 08:00 to 13:00
Closed: Sunday
Admission: free

Laid out in 1560 by Giorgio Vasari, the Piazza Dei Cavalieri opens unexpectedly from the narrow backstreets and the central square of medieval Pisa. The curving Palazzo dei Cavalieri (Palazzo della Carovana) is topped with large busts of the Medici and adjoins the church of Santo Stefano dei Cavalieri. On the other side of the square is the imposing Palazzo dell'Orologio and heading east is the Borgo Stretto, one of Pisa's smartest streets with a wide selection of shops. The Piazza dei Cavalieri was once the seat of the Ordine dei Cavalieri di Santo Stefano, (Order of the Knights of St. Stephen), which was a religious and military institution founded to defend the coast from possible threats by the Turks.