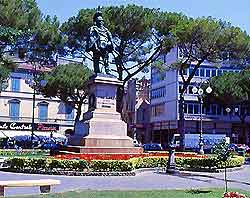 Famous for its Leaning Tower the world over, Pisa is also gaining quite a reputation for its museums and art galleries, and deservedly so. Standing on the Piazza del Duomo, in central Pisa, is the Museo delle Sinopie, which stands within a former hospice and houses many interesting Tuscan collections and pictures.

The absorbing Cathedral Works Museum (Museo dell'Opera del Duomo) is an old chapter house which is now home to a large and significant collection of sculptures, paintings and other works relating to the ecclesiastical buildings standing on the Piazza del Duomo. Also of great note is the Lungarno Simonelli Museum (Le Navi Antiche di Pisa), which is filled with Roman treasures and lovingly restored riverboats, some of which are almost 2,000 years old and have only been excavated fairly recently.

Address: Lungarno Mediceo, Piazza San Matteo 1, Pisa, Italy
Tel: +39 (0)50 565 047
Located on the banks of the River Arno, the Museo Nazionale di San Matteo in Pisa is housed in the ancient convent of the nuns of San Matteo. There are interesting collections of impressive paintings and sculptures dating from between the 12th and 18th centuries. The first rooms are devoted to sculpture and early Tuscan paintings and additional rooms contain paintings by Guido Reni, Benozzo Gozzoli, Roso Fiorentino and an important picture of Christ, painted in the early 1400s and attributed to Fra Angelico. Other highlights include a 14th-century statue of the Madonna del Latte by Andrea Pisano (a talented, local sculptor) and 14th-century altarpiece panels by Francesco Traini and Simone Martini.
Open hours: daily - 09:00 to 19:00
Admission: charge

Address: Medici Arsenale, Ponte della Cittadella, Pisa, Italy
Situated in the old Medici Arsenale, the Lungarno Simonelli Museum houses many interesting finds from ongoing excavations and restorations of ancient wooden Roman ships and riverboats, which were first discovered by builders in 1998 at the San Rossore train station. Dating back to the 1st century and buried deep in silt where the docks were once located many years ago, these ancient boats are well preserved. Many other interesting artefacts have also survived from the boats and these include clay amphorae - still sealed with 2,000 year old contents such as olives, cherries, walnuts and wines, and also the belongs of the sailors, such as leather sandals, sewing kits, even a wax writing board.
Open hours: Tuesday to Sunday - 10:00 to 13:00 and 14:00 to 18:00
Admission: charge, free to children under 10

Address: Piazza Arcivescovado 6, Pisa, Italy
Tel: +39 (0)50 560 547
There are many rooms full of interesting exhibits housed within the Cathedral Works Museum, such as detailed models of the Duomo buildings, engraved glass, delicate 12th-century carvings and marble decorations, 13th-century statues by Giovanni Pisano originating from the baptistery, numerous frescoes, etchings and many other prints. Highlights include an enormous 12th-century wooden crucifix from Burgundy, with a medieval-style Christ that almost looks like modern art and an Islamic bronze griffin, which was obtained in the Crusades and used to be displayed in the Duomo's cupola before being replaced by a copy.
Open hours: April to September, daily - 08:00 to 19:40, March and October, daily - 09:00 to 17:40, November to February, daily - 09:00 to 16:40
Admission: charge

Address: Piazza del Duomo, Pisa, Italy
Tel: +39 (0)50 560 547
Noteworthy features at the Museo delle Sinopie include the famous Sinopie sketches (a sinopia is a monochrome sketch over which a fresco is painted) that were found under the remains of the Camposanto's ruined frescoes and reconstructions of Carlo Lasinio's 19th-century engravings of frescoes. The museum was founded in 1979 and today provides an insight into the different approaches taken by artists when creating these intricate paintings - some confidently sketched rough outlines as a general guides, whilst other artists spent much more time sketching the final picture in great detail, including shading. Also illustrated in the Museo delle Sinopie are how many of the images evolved and changed between the initial sketch and the finished work.
Open hours: April to September, daily - 08:00 to 19:40, March and October, daily - 09:00 to 17:40, November to February, daily - 09:00 to 16:40
Admission: charge