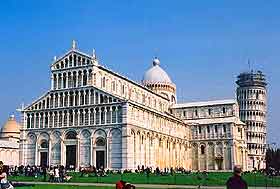 Religion has long played an important part of life in Tuscany, and in the city of Pisa, the religious buildings have added a huge amount of character to the city.

At the heart of the city's much-visited Field of Miracles (Piazza dei Miracoli) is the parent of the Leaning Tower itself, the Cattedrale (Cathedral), which also goes by the name of Il Duomo di Pisa and is accompanied by the Battisero.

Building work on the Duomo commenced in the middle of the 11th century and it was this elaborate Romanesque-style architecture that really set the tone for so much of Pisa. The simple design incorporates a huge quantity of coloured marble, with the cathedral boasting five naves, giant bronze doors, mosaics, a gilded ceiling and various religious statues. Visitors enter via the Porta di San Ranieri doorway, opposite the Leaning Tower.

Especially close by and on the Piazza Arcivescovado, the Museo dell'Opera del Duomo houses many of the actual sculptures and treasures originating from the cathedral itself, including art works created by famous Italian sculptors such as both Giovanni Pisano (1250 to 1315) and Nicola Pisano (1220 to 1284). 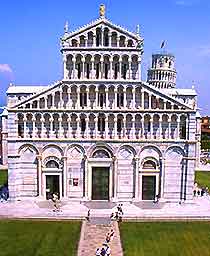 Following considerable fire damage at the very end of the 16th century, the Pisa cathedral was quickly renovated and restored, with its destroyed art works being replaced by top Italian Renaissance artists from that period. Particular attractions include the famed Pisano pulpit, which was interestingly uncovered in a crate in the 1920s, being reassembled and returned to its former setting soon afterwards. The 1315 tomb of Emperor Henry VII by Tino da Camaino, the bronze angels located directly above the choir entrance and the Christ Pancrator mosaics from the 13th century are all further highlights, as are the frescoes decorating the Duomo's iconic dome.
Open hours: April to September, daily - 08:00 to 20:00, March and October, daily - 09:00 to 18:00
November to February - Monday to Saturday 07:45 to 13:00 and 15:00 to 17:00, Sunday 07:45 to 13:00 and 15:00 to 18:00
Admission: charge 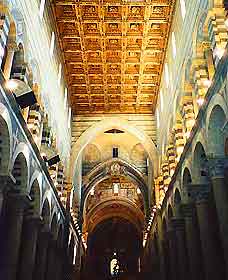 Other churches in Pisa include: