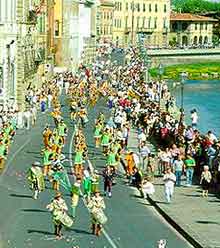 Leading magazines for upcoming Tuscany / Pisa festivals and events are regularly published and there are weekly event guides that are readily available. These detailed guides contain up-to-date listings of events throughout Italy, with a focus on Pisa and the Tuscany region and are aimed specifically at tourists and visitors. These magazines are a useful source for shopping, dining and entertainment in Pisa - providing you with a varied choice of things to see and do in Pisa, Italy. One of the most popular magazines for information about Pisa events and festivals is the free weekly 'Indizi e Servizi', which is readily available at newsstands and some hotels. 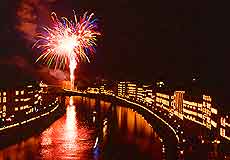 Pisa's largest traditional event in the annual Gioco del Ponte (Game of the Bridge), which takes place on the last Sunday in June. It involves twelve teams from both the north and south banks of the city staging a number of battles, including pushing a seven-tonne carriage across the Ponte di Mezzo, Pisa's old Roman bridge. This historic event was first recorded in 1568 and still features medieval costumes.

Italy's four main maritime republics (Almalfi, Pisa, Genoa and Venice) take turns to hold the Regatta della Antiche Repubbliche Marinare, which is held in Pisa during late May or early June. This involves four eight-man crews racing against each other on the River Arno, together with much festivity and many parades.

Also popular are concerts at the Teatro Communale Verid, in Via Palestro, and for more offbeat and modern shows, including the occasional rock concert, visit the former church at Via San Zeno. Pisa also offers an exciting arts cinema, Cinema Nuove, which is situated in the Piazza Stazione.