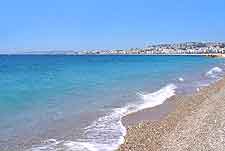 The history of Nice can be traced back to earliest times, although exactly how far back is a matter of some discussion. Some believe that, according to archaeological evidence, it dates back many thousands of years. Others believe that it was founded by the Greeks of Marseille in 350 BC. Known as Nikaia, or 'The City of Victory', it rapidly grew into a busy trading centre.

We do know for certain that the Romans once occupied the city. They chose to settle in a district of Nice that is known today as Cimiez. When the Roman Empire fell and its forces started to pull out of their various territories, the city became part of the Genoese League. From the 8th to the 10th century AD, the city came under attack from the Saracens. Finally, in 974 AD, William of Provence repelled the Saracens for good.

During the Middle Ages, Nice's history was closely linked with that of
Italy. It was an ally of the city-state of Pisa and the enemy of Genoa. In addition, it constantly had to guard against advances made by the King of France. During the 13th and 14th centuries, Nice fell to the counts of Provence. Eventually, in 1388, it came under the control of Savoy. During this period, the city was more heavily fortified against coastal attack from Barbary pirates.


In 1626, Nice's fortunes were given a boost by a proclamation that gave it full freedom of trade. At this time, the city was briefly under the control of the Duke of Guise. Ownership of the city was to change hands several times in the years that followed and it was given back to Savoy in 1713. In 1792, Nice was conquered by France. 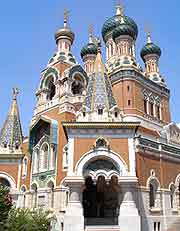 In 1814, Nice became part of the Kingdom of Piedmont-Sardinia. In 1860, however, in order to raise funds, King Immanuel III offered the city to Emperor Napoleon III. In exchange, Italy would benefit from French financial and military support in the Italian War for Independence against Austria. The people of Nice were asked to vote on the deal. Giuseppe Garibaldi tried to persuade the Niçois to turn it down, to no avail. In the years that followed, public disturbances continued to be staged by those who agreed with Garibaldi, namely that the city should be unified with Italy.

Nice has long had a connection with English visitors. After its incorporation and the arrival of the railway in the city, it came to rely on English tourism even more. In 1900, the Tramway de Nice was electrified, introducing a means of modern transport that allowed visitors to travel more easily to nearby Menton and Cagnes-sur-Mer. 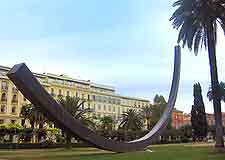 During the history of the 1920s, Nice and the surrounding area became a popular haunt of writers and artists. They included the likes of Ernest Hemingway and Aldous Huxley. The city started to build on its image as a place of entertainment for the rich and famous. In 1927, the first casino was opened on the coast. Five years earlier, a luxury train known as the 'Train Bleu' made its first journey from Calais.

Political life during the 20th century was dominated by two men - Jean Medecin and his son Jacques. Both men carried out the role of mayor for many years. It was Jean who hit the headlines in the 1990s, when he was convicted of political corruption.

Today, Nice is the fifth-largest city in France in terms of population size. It remains a major tourist city and the top resort on the French Riviera, attracting some four million visitors each year.