Getting Around, Nice Travel, Transport and Car Rental 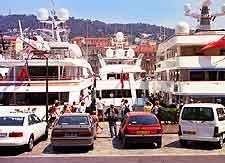 Nice may be a relatively large city, but with its compact centre and pedestrianized areas, it is easy to travel around it without a car if your hotel is within Nice city centre. Most major attractions can be reached on foot.

Nice also has a good public transport system, although many visitors prefer to hire a car in order to make day trips out of Nice. Both Monaco and Cannes are less than a 30-minute drive away, making car hire in Nice extremely popular for those who favour excursions. Even Marseille is within driving distance, although lies further away and can be reached in approximately two hours by road. Rental cars allow you to travel the coast with relative ease, or to one of the other Riviera resorts, or to simply travel inland and into the mountains.

Address: 06281 Nice Cedex 3, France
Tel: +33 4 8988 982
Nice has its own international airport, Aéroport Nice-Côte d'Azur, situated just 7 km/ 4 miles from the city itself. The airport has two terminals and is the second largest France. It provides direct flights to the United States of America, Britain and the rest of Europe, and is well-served by a number of budget airlines. Transport between Nice's airport and the city centre is plentiful and all travel options are reasonably priced.

Visitors to Nice in July and August may find that negotiating the city of Nice itself is a stressful experience. Parking can also be difficult to find. Hence, if you plan to just stay in Nice itself, it's probably worth using public transport or simply exploring on foot. However, if you want to travel to some of the hidden gems of this region, then hiring a car is a convenient way to get around. Nice is served by an extensive road transport network, which links the city to Marseille, Grenoble, Digne-les-Bains and also Montpellier. 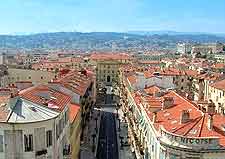 Nice and its surrounding towns and villages are well served by an excellent local bus service. Buses operating around the city can be caught from Nice's central bus station on the square Général Leclerc. Long-distance and regional bus and coach transport link Nice with major towns and cities along the Côte d'Azur, providing travel from the city's intercity bus terminal on the Boulevard Jean Jaurès.

Nice's main train station is the Gare Nice Ville, located on the Avenue Thiers. From there, it is a short walk to the city centre and the beach. Fast and frequent trains travel along the coast, stopping at the Riviera's main resorts, including Antibes, Cannes and Monaco. France's high-speed TGV service links Nice with Paris, via Lyon. Nice's smaller Gare du Sud train station provides diesel-train transport to Digne-les-Bains.

Taxis travel all over the city of Nice, from early in the morning until midnight. It's always worth checking that your journey is being metered and that you are being charged the correct rate.

Nice's Port is situated in the city centre and a few minutes' walk from many of the city's main tourist attractions. A high speed ferry service travels between Nice and Corsica, while traditional ferry boats also transport passengers and their cars to Corsica.