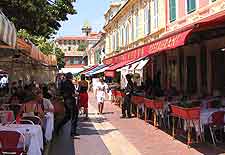 Visitors to Nice won't be disappointed by the cuisine, fine dining and many, many restaurants on offer. There is a huge selection of eateries to choose from in the city, ranging from upmarket restaurants to cheap and cheerful bistros, as well as a multitude of small cafes and fast-food snack stalls.

Nice also has numerous bakeries, patisseries and fresh produce markets where you can buy the ingredients for a picnic on the beach or in one of the city's many parks, should you desire. 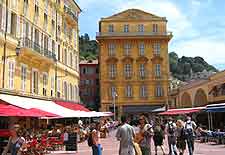 Lunches are generally served from midday onwards, so it's best to get seated early if you want to have a relaxed meal. If you're eating out in Nice in the evening, it's usually a good idea to book a table in advance, either by telephone or by popping into the restaurant itself earlier in the day.

Expect to eat from around 19:30 or 20:00 onwards. Snacks, pastries and the like are available throughout the day. 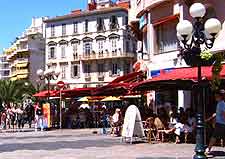 A Niçois fast-food favourite is 'socca', a thin chickpea flour pancake is that is batter fried in olive oil and served with just salt and pepper. These are served from market stalls and at smaller eateries as a light lunch or snack.

Few visitors to Nice leave without having tried an authentic salade niçoise at least once. Other popular dishes from the region include ratatouille, stuffed courgette flowers known as farcis, and soupe au pistou, a vegetable and bean soup.

As you'd expect, seafood is also popular on restaurant menus in Nice. Octopus and langoustine often make an appearance on many restaurant's seafood platters. 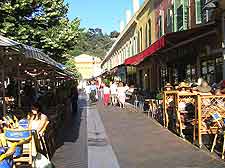 Vieux Nice is lined with restaurants and cafes, offering everything from local seafood specialities to pizzas and traditional French fare and fine dining. In particular, the area around Cours Saleya is a popular area for dining out.

In the modern part of Nice, the area around the Rue Masséna is also notable. With its largely pedestrianized streets and squares, this area lends itself to al fresco dining, with many pavement cafes and terrace restaurants.

Whilst many restaurants in Vieux Nice and within the Rue Masséna area undoubtedly offer plenty of atmosphere and good food, they can be quite pricey because of their location. Better-value dining options can be had by exploring the area around Nice's main railway station.

If you're not on a budget, or simply fancy splashing out on a special meal during your visit, then Nice has a number of restaurants that are held in particularly high regard. These include La Petite Maison and also Le Comptoir.