Think of Nice and what probably springs straight to mind is its seafront location, dominated by a long promenade overlooking the sparkling blue waters of the Mediterranean. Perhaps less well known is the fact that Nice also boasts a charming old town quarter, vibrant modern district and affluent suburbs.

Each of these neighbourhoods has plenty to offer visiting tourists, including parks, museums and shopping centres. Nice's main districts and locations are given below.

Nice's Promenade des Anglais harps back to the days when, every afternoon, wealthy English visitors and residents took a stroll along the palm-fringed seafront. 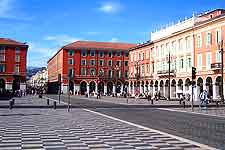 At the centre of modern Nice is the Place Masséna. This is where Nice's main shopping street can be found, and where the everyday hustle and bustle of the city takes place, away from the city's more rarified resort atmosphere.

The old quarter of Nice dates back to medieval times. For many visitors, its main attraction is an eclectic mix of exclusive boutiques, restaurants and art galleries, with more down-to-earth shops and cafes. A maze of alleys and narrow streets overshadowed by tall buildings give the place a real charm and atmosphere that is best soaked up by wandering around on foot. Most of Nice's old town neighbourhood is conveniently pedestrianised. If you've had enough of lounging on the beach during the summer, this is also a good place to grab a spot of shade. 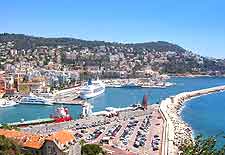 Just a stone's throw from Vieux Nice is the city's port district, dominated by its picturesque old port and harbour. Frequented by fishermen, the yachting fraternity, cruise ships and ferries, this is a busy neighbourhood with plenty to see and do. It is particularly popular with Nice's restaurant-goers.

North of Nice centre lies the exclusive suburban neighbourhood of Cimiez. Dominated by a vast Victorian hotel and its distinctive high-walled villas, the slopes of Cimiez remain very much the centre of Nice's wealthy residents.