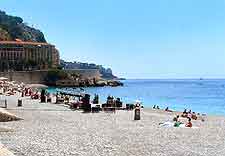 Nice has a lively festival scene, with plenty of things to do all year round. The city's biggest event of the year - and indeed the biggest on the whole of the French Riviera - is the Mardi Gras Carnival, a festival that is held every February in Nice. The carnival's colourful parades draw large crowds of tourists and participants. Other significant events within Nice include seasonal markets and fairs, sporting events and music concerts.

A useful source of information about events taking place in Nice is the publication, 'Cotê d'Azur den Fêtes', available from the tourist office.