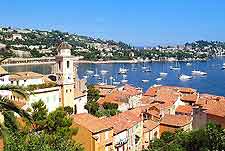 Whilst there is no shortage of attractions in Nice itself, few visitors can resist the temptation to head out along the coast in search of other glittering Côte d'Azur towns and cities.

By way of contrast, a short trip inland brings you to more traditional, but nevertheless charming, Provençal villages.

Many of these villages are close to Nice and full of appealing attractions, having become popular haunts for the region's artists. 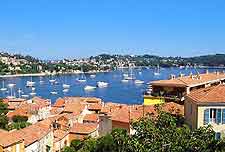 Nearby Monaco has plenty of attractions, including museums, historic buildings and parks. One of the main events of the day is the Changing of the Guard ceremony on the Palace Square. Avid shoppers will not be disappointed with Monaco's abundance of haute couture fashion boutiques. Perhaps most popular of all is the opportunity to glimpse one of the many celebrities that grace Monaco's boulevards. 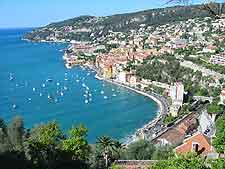 This small seaside resort is about 6 km / 4 miles east of Nice. In the past, Villerfranche's famous inhabitants have included actress, Katherine Mansfield and writer, Aldous Huxley. Today, it is home to the likes of Tina Turner. With attractions which include its charming medieval streets, deep water harbour and sandy beach, it's little wonder that the resort has become a popular destination for Nice's daytrippers. 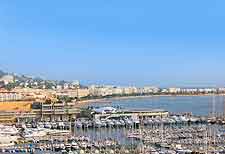 If you've not had enough of shopping in Nice and want to go even more upmarket, then a visit to nearby Cannes is a must. Of course, the town's major attraction has to be its annual film festival, when it really sparkles. Cannes is, however, the star of the Rivieria when it comes to shopping, with a seemingly endless selection of shops selling jewellery, haute couture fashion and works of art. 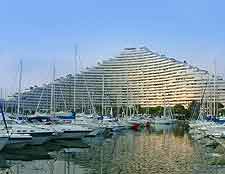 Situated between Nice and Cannes is the small town of Villeneuve Loubet. The town's two spas offer a variety of treatments. Nearby attractions which are also worth a visit are Villeneuve's medieval château and other historic buildings.

Just a little way inland from Nice, set among hills, is the charming village of Vence. This beautiful medieval market town is charm personified, with its wealth of medieval buildings and ancient gateways still intact. Vence has an abundance of pavement cafes, which are perfect places to sit and watch the world go by. Known as the 'City of Art', Vence is also a town of artists. Famous artists who have lived and worked here include Mark Chagall, and Matisse. Writer, D. H. Lawrence also spent his final years here. Walking tours of Vence are available, taking in many of the town's key tourist attractions and sites of interest.