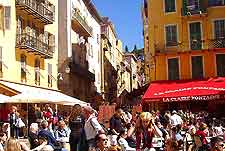 There are plenty of shopping streets worth exploring within the French city of Nice. What's more, this is an easy city to walk around. As well as independent shops selling more unusual gifts and local goods, Nice boasts most of France's popular high street stores.

Nice also has some fine open air markets, which are full of French character. For many visitors, however, the highlight of a shopping spree in Nice has to be a visit to its exclusive boutiques and haute couture establishments.


When to Shop and Opening Hours

Nice's fresh produce markets open early morning, from around 06:00, and are closed by lunchtime, so an early start is important if you want to see them at their best. Markets selling flowers and bric-a-brac tend to stay open until later in the afternoon, until around 17:30. If you're shopping for a bargain in one of the exclusive boutiques in Nice, then plan to visit in January or July, when shop sales are permitted to take place in France. 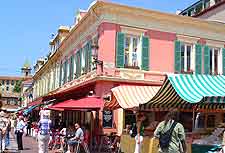 In the narrow streets of Vieux Nice, there are plenty of small, independent shops selling giftware, handmade crafts, regional goods and clothes.

Many of Nice's main department stores, high street shops and shopping centres are located on and around the Avenue Jean Médecin. These include the Nouvelle Galleries, which extends over several floors and sells everything you'd expect to find in a traditional department store. Half way up the Avenue Jean Médecin is Nice Etoile, a shopping centre where you will find a large number of boutiques, as well as high-street favourites. Nice Etoile's parking facilities are good and can come in handy if you find yourself having to take the car into town. 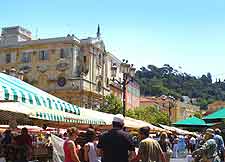 Nice's main pedestrian shopping street is the Rue de France, which runs from the end of the Place Massena. As well as exclusive clothing boutiques, there are plenty of cafes and restaurants where you can take a welcomed break from shopping.

If you don't mind the trip out of town, Cap 3000 is a large shopping complex just west of the Nice-Côte d'Azur Airport. For those everyday items, there are branches of Casino and Carrefour supermarkets.

Few visitors can resist the charm of one of Nice's many outdoor markets, which always make for a memorable shopping experience. The city's main market is held in Cours Aleya, with fresh produce and flowers on sale from Tuesday to Sunday. Get there at 06:00 and you stand a chance of picking up a bargain. On Monday, the market sells antiques, bric-a-brac and secondhand clothes. Nice's fish market is held on place St. François every day apart from Monday. Again, it's important to get there early, as proceedings start at 06:00.