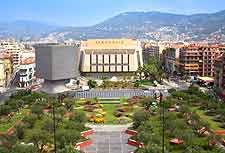 Nice is an important historic and cultural city, as well as a popular coastal resort. Whilst its many beaches feature among the city's most popular natural landmarks, Nice is equally well known for its 19th-century seafront walk known as the Promenade des Anglais.

In recent years, monuments to modern art and contemporary architecture have also sprung up around Nice and have become increasingly popular with visitors to the city. 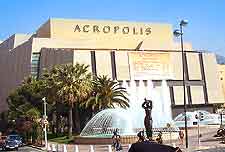 Address: 1 Esplanade Kennedy, Nice, France, FR
Tel: +33 04 93 92 83 00
Not a historic monument in the ancient Greek style, but a striking multimedia and conference centre. Built thirty years ago at a time when Nice led the way in the world of contemporary art, the Acropolis has become a major landmark in Nice. A sculpture by César is on display in the Acropolis' entrance hall. Today, this vast building is open to the public as an exhibition space, bowling alley and cinema. Visitors should note that entry can be limited if a conference is being held.
Open hours: daily, all year round
Admission: free 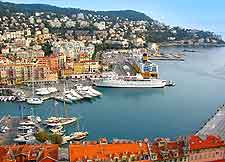 Address: Place Ile-de-Beauté Nice, France, FR
Although not as big as some of the harbours along this part of the coast, Nice's Old Port is a monument to its position as capital of the French Riviera. As well as an impressive number of expensive-looking yachts, the Old Port boasts the imposing Notre Dame du Port church and many fine 18th-century buildings, with their traditional shutters and red exteriors.
Open hours: daily
Admission: free 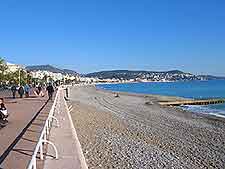 Nice's visitors and residents first started to stroll up and down the famous Promenade des Anglais back in 1822. Today, it remains a popular way of whiling away an afternoon. As well as walking its 6 km/ 4 miles, visitors can consider strapping on their rollerblades or even taking to one of the gyroscopic bikes on hire.
Open hours: daily - 24 hours
Admission: free 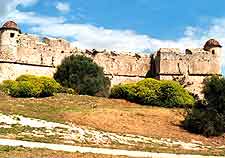 Address: Route du Fort du Mont Alban, Nice, France, FR
This 16th-century fort is a good example of French military architecture, and is remarkably well preserved, despite having suffered some damage during World War Two. Although the interior of the Fort du Mont Alban is closed to the public, this is still a monument that's worth a visit because of the spectacular panoramic views it affords. From the fort, it is possible to see not only Nice itself, but also its beaches and port - and even along the coast as far as Cap Ferrat.
Open hours: daily
Admission: free 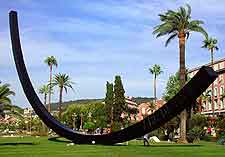 Address: Jardin Albert Ier Nice, France, FR
In the beautiful surroundings of one of Nice's most popular parks, the Jardin Albert Ier, is a gigantic metal arc. Created by sculptor, Bernard Venet, this contemporary sculpture has become one of the city's unmissable and iconic landmarks, contrasting in a rather dramatic way against the surrounding palm trees and greenery.
Open hours: daily
Admission: free