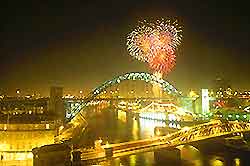 Every single month of the year in Newcastle offers a number of festivals or related things to do, with springtime football matches being followed by summer concerts, flower shows and community events.

Each January or February sees the arrival of the Chinese New Year celebrations, when the vibrant Chinatown district sees an explosion of oriental foods, dancing, firecrackers, lanterns and parades, being based around Thornton Square and the Chinese Arch on Stowell Street. Various Newcastle FC football matches can also be enjoyed at this time of the year, often being staged at the team's home ground of St. James's Park (currently known as the Sports Direct Arena).

Each March, the Newcastle Science Fest is a particular highlight at the Life Science Centre, while further events of note take place at venues such as the city's Racecourse, the Theatre Royal, Caedmon Hall and the City Hall, as well as within nearby Sunderland and Whitley Bay. The Whitley Bay Jazz Festival is worth looking out for each October, as is the Family Day at the Beamish Living Museum of the North, followed by the Gateshead Bonfire and Fireworks Party in November, and December ice skating at Times Square.