Getting Around, Newcastle Travel, Transport and Car Rental 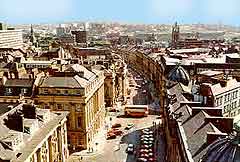 Newcastle is an important transport hub and is served by Newcastle Airport - a major airport on the outskirts of the city, trains - with frequent train departing from the Central Station, buses, coaches and taxis. The city is also home to its famous Tyne and Wear Metro system, which was the first light rapid rail transit system in the United Kingdom.

Newcastle is located close to many other interesting towns and cities, such as Blyth, Hartlepool, South Shields, Sunderland and Whitley Bay, the latter of which can be reached by following either the Coast Road (A1058) or Whitley Road (A191) in a north-easterly direction.

Newcastle is served by a number of airports, the closest and most convenient of which is Newcastle International Airport (NCL). London airports, including Heathrow Airport (LHR), Gatwick Airport (LGW), Stansted Airport (STN) and London City Airport (LCY) are also within easy travelling distance of Newcastle, by either train, coach or car.

Newcastle is served by a number of major roads, which travel to major towns and cities throughout the country. The A1 (M) passes through the Newcastle-upon-Tyne area and connects the city to London and the south of England, via the M62 motorway. The nearby A69 links to the west, towards Carlisle, the Lake District, and via the M6 motorway to the south and west of England, and via the M74 motorway to Glasgow in Scotland.

Although the traffic in and out of Newcastle can be heavy during peak commuting hours (07:30 to 10:00 and 16:00 to 18:00), driving in the city centre is fairly easy. There are plenty of parking garages and off-street parking areas available in the city, although many areas are restricted to residents only and parking permits are required. Renting a car is often the preferred method of transport for excursions and it is relatively easy to travel around the county of Tyne and Wear by car.

Bus services in Newcastle are plentiful and frequent, and special bus tickets are available for families for exploring the surrounding area. The buses are heavily used by both locals and tourists alike and provide a particularly inexpensive way to get around Newcastle-upon-Tyne. Buses and coaches travel to many other towns and cities nearby and bus passes are available for set periods. Most depart from the following bus stations: 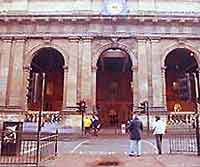 Address: Neville Street, Newcastle-upon-Tyne, Tyne and Wear, NE1 5DF, England
Tel: +44 (0)845 748 4950
The Central Station is located in the city centre and operates direct train services that travel throughout the United Kingdom, to many major cities and towns, including many local destinations. Served by Great North Eastern Railways, Virgin Cross Country and Regional Railways, the train journey from Newcastle to Edinburgh takes around one and a half hours, and London can be reached in less than three hours. Advance seat reservations can be booked if required and cycle racks are available outside of the Central Train Station.

Tel: +44 (0)191 232 5325
The Tyne and Wear Metro was the first light rapid rail transit system in the United Kingdom and connects the Newcastle-upon-Tyne and Gateshead region with surrounding areas, include Newcastle Airport. This fast and efficient train network has been rated as one of the most efficient methods of travel in the country and each year, the Tyne and Wear Metro trains carry more than 40 million passengers. The Metro system travels underground through the city and Gateshead, and then above ground elsewhere, and operates daily from 05:15 to 23:30. Of note, regular Metro trains run every 3 to 15 minutes.

The International Ferry Terminal is situated at Royal Quays in North Shields, just 11 km / 7 miles from central Newcastle. This important ferry terminal is the north of England's main sea link and connects Northern Europe and Scandinavia, as well as providing regular services to the Netherlands, Norway and Sweden.

Taxicabs are certainly amongst the most convenient ways to travel short distances around the city and are usually reasonably priced. They can be easily caught from the main taxi rank outside of the Central Station, outside of Newcastle Airport's terminal building, at the ferry terminal and outside all of the major shopping areas. Many of the city's Metro Stations also have taxi ranks nearby.

Bicycles can be hired from a number of stores in the city, with daily and weekly rental being offered. There are numerous cycle trails and pathways throughout Newcastle, with paths running along the River Tyne.