The city of Newcastle is sited in the borough of Tyne and Wear, and within North-East England. Newcastle resides on the northern bank of the meandering River Tyne, while nearby, Gateshead is directly to the south.

Often referred to as Newcastle upon Tyne, the city is connected to Gateshead by a series of stylish bridges, such as the Tyne Bridge and the utra-modern, tilting Gateshead Millennium Bridge. The historic quayside area has enjoyed much regeneration in recent years and is now a trendy place to hang out, with restaurants, galleries, bars and nightspots galore.

Newcastle upon Tyne's city centre is very walkable, although underground Metro trains are on hand, connecting the main sights and outlying accommodation. The Central Station (railway) is to be found just a short distance to the south of the city centre. Buses converge at Haymarket and Eldon Square, while the coach station is located at Gallowgate.

Maps of Newcastle upon Tyne are available all around the city, with tourist offices located at the train station, Grainger Street and at St. Mary's Church in Gateshead.

Map of Tyne and Wear 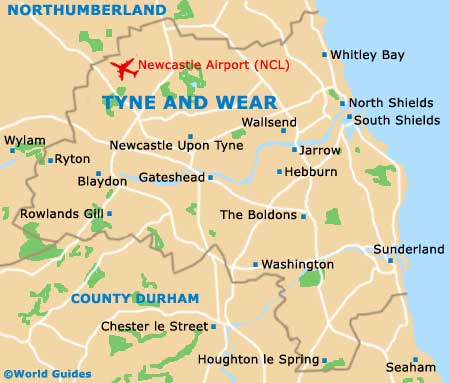