The landmarks of Newcastle really do include some of England's most famous, loved and impressive. Connecting the Quayside with the South Shore Road, the iconic Gateshead Millennium Bridge regularly appears on promotional material for the city and is a superb example of modern design at its finest. The considerably older Tyne Bridge is another of Newcastle's most notable sights and was opened by King George V in October 1928

In keeping with the contemporary theme of the New Millennium is the rather striking Angel of the North, which lies roughly ten minutes to the south of the city and presides over neighbouring Gateshead. For something altogether more historic in the Newcastle area, you may like to check out the city's namesake 'New Castle'. Alternatively, pay a visit to the Tynemouth Castle and Priory, or search out some of the remaining chunks of Hadrian's Wall, a Roman landmark of epic proportions built almost 2,000 years ago and now understandably listed as a UNESCO World Heritage Site. 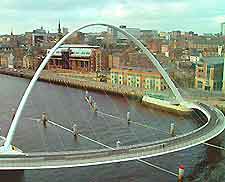 Address: St. Mary's Church, Oakwellgate, Gateshead, Tyne and Wear, NE8 2AU, England
Tel: +44 (0)191 477 5380
The Gateshead Millennium Bridge is designed for both pedestrians and cyclists, and features a mesmerising tilting mechanism, being raised to allow tall ships to pass freely. Opened in 2001 and dedicated by Queen Elizabeth II in 2002, the iconic Millennium Bridge was built at the cost of more than £20 million and was partly funded by the Millennium Commission. The measurements are impressive, with the total length being 126 metres / 413 feet, while the width is just 8 metres / 26 feet. Watched by large crowds on the riverbank, a number of annual sailing competitions pass under the bridge each year, such as both the Cutty Sark Tall Ships' Race and the Northumbrian Water University Boat Race.
Open hours: daily - 24 hours
Admission: free

Angel of the North

Address: Durham Road, Low Eighton, Gateshead, Tyne and Wear, NE9 6AA, England
Tel: +44 (0)191 477 3478
One of the United Kingdom's most famous landmarks of the 20th century, the Angel of the North statue is only 6 miles / 10 km to the south of the city centre, being located in nearby Gateshead and sited next to the A1, just off the Durham Road (A167). This elegant steel sculpture is of epic proportions and stands some 20 metres / 66 feet tall, with its distinctive rectangular wings being almost 55 metres / 180 feet wide. Construction of the 'Angel' began in 1994 and was finally completed in early 1998, costing approximately £1 million. The dull orange colour is caused by the natural weathering and rusting of the steel.
Open hours: daily - 24 hours
Admission: free 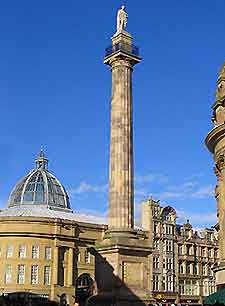 Address: Grey Street, Newcastle-upon-Tyne, Tyne and Wear, NE1 7RU, England
Grade-I listed Grey's Monument stands within the principal shopping precinct and was erected in 1838. This tall column towers for more than 40 metres / 131 feet and is dedicated to Charles Earl Grey, the UK Prime Minister between the years of 1830 and 1834. At the very top of the monument is a statue of Grey himself, which can actually be reached via a steep spiral staircase, although this is rarely opened. The neighbouring Monument Mall Shopping Centre is a good place to head on a rainy day.
Open hours: daily - 24 hours
Admission: free

Address: The Society of Antiquaries, Castle Keep, Castle Garth, Newcastle-upon-Tyne, Tyne and Wear, NE1 8QN, England
Tel: +44 (0)191 232 7938
Newcastle was founded by Robert Curthose, son of William the Conqueror, in 1080. The original 'New Castle' stood on the site of a Roman fort, but was rebuilt in stone in the late 12th / early 13th century, with the keep, a gatehouse and an enclosing wall being added at around this time. Two royal accommodation suites, a Norman chapel, a public hall, a private room, and a garrison room can still be seen, while the castle roof provides a breathtaking scenic view of the cityscape, including the River Tyne.
Open hours: April to September, Tuesday to Sunday - 09:30 to 17:30, October to March, Tuesday to Sunday - 09:30 to 16:30
Admission: charge, discounts available for children and seniors 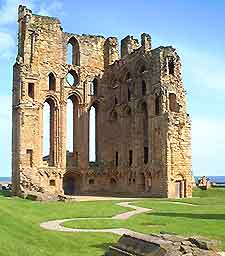 Address: Tynemouth, Newcastle-upon-Tyne, Tyne and Wear, NE30 4BZ, England
Tel: +44 (0)191 257 1090
The 11th-century Tynemouth Castle and Priory is located just under 10 miles / 16 km to the east of central Newcastle and is a historic landmark offering an array of attractions, including uninterrupted views of Tynemouth Pier and old gun batteries. Now owned by the English Heritage, the castle resides on a rocky headland and these ruins also incorporate the Benedictine priory where members of the Northumbrian royal family were once laid to rest. The priory itself is known to date back to the middle of the 7th century, and whilst some Roman artefacts have been found onsite, there is no firm evidence of past Roman occupation of this area.
Open hours: April to September daily - 10-00 to 18:00; October, daily - 10:00 to 17:00; November to March Wednesday to Sunday - 10:00 to 13:00 and 14:00 to 16:00
Admission: charge, discounts available for children and seniors, members of the English Heritage are free 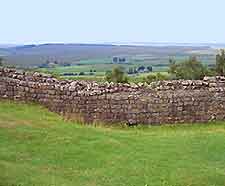 Address: Newcastle-upon-Tyne, Tyne and Wear, NE99 1DX, England
Hadrian's Wall was built by the Romans in approximately AD 122 and this ancient creation formed the northernmost point of the Roman Empire in Britain at this time. In its heyday the wall was over 112 km / 70 miles long and travelled from coast to coast. This stone-built wall was approximately 7 metres / 23-feet high and featured forts that were built at regular intervals, as well as numerous turrets and milecastles. Today, many surprisingly well-preserved sections remain along the original route, although some parts have since been dismantled, with the stones used for various building projects.
Open hours: daily - 24 hours
Admission: free

Address: 41 - 44 Sandhill, Quayside, Newcastle-upon-Tyne, Tyne and Wear, NE1 3JF, England
Tel: +44 (0)191 269 1200
Comprising two separate houses, Bessie Surtees House lies on the southern side of the city centre, close to the Swing Bridge and the Tyne Bridge. These historic houses were once called home by local merchants living next to the Quayside and the timber-fronted Jacobean architecture remains well preserved. Head to the first floor to find out more about the history of these important landmarks, where you can learn all about Bessie Surtees and how she once famously eloped with the future Lord Chancellor.
Open hours: Monday to Friday - 10:00 to 16:00
Admission: free

Address: Castle Garth, Newcastle-upon-Tyne, Tyne and Wear, NE1 1RQ, England
Tel: +44 (0)191 261 5390
The Black Gate dates back to the mid-13th century and was commissioned by Henry III, in order to strengthen the castle's entrance. During the 17th century two new storeys were added, when the structure was converted into tenements. The Black Gate is now home to the headquarters of the Society of Antiquaries of Newcastle-upon-Tyne. Of interest, the wooden footbridges at the front and back were once drawbridges and often raised.
Open hours: by arrangement only

Address: New Bridge Street, Newcastle-upon-Tyne, Tyne and Wear, NE1 8AN, England
The Blue Carpet, located in the backwater of the city centre, is a striking pedestrian public square situated on New Bridge Street, in front of the Laing Art Gallery. This is public art on a grand scale, emulating the idea of a huge blue carpet that has fallen from the sky and simply left to lie where it had landed, although it should be said that since its creation in 2001, the tiles have faded somewhat and now appear more grey than blue. Contemporary seating is available and subtly lit underground spaces feature mini-galleries displaying historical artefacts, with mature trees enhancing the overall design.
Open hours: daily - 24 hours
Admission: free 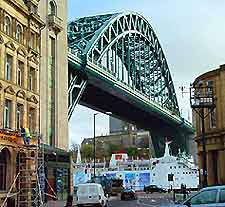 Address: Tyne Tunnel, South Shields, Newcastle-upon-Tyne, Tyne and Wear, NE8 2AU, England
The symbolic arched Tyne Bridge has become one of the most famous and photographed of all the landmarks in Newcastle, reflecting in the River Tyne and taking on an altogether elliptical appearance when viewed from a distance. Located in the city centre and measuring in at 59 metres / 193 feet high by 389 metres / 1,275 feet long, this 7,000-ton bridge took slightly more than three years to complete, being built between 1925 and 1928. Two elevators are in operation and connect the quayside below.
Open hours: daily - 24 hours
Admission: free

Address: North East Civic Trust, Monk Street, Newcastle-upon-Tyne, Tyne and Wear, NE1 4XN, England
Tel: +44 (0)191 232 9279
Blackfriars, a renovated friary dating back more than 800 years, is located in Newcastle city centre and within walking distance of the shops of both Kettlewell and Eldon Square. This historic building served as a monastery retreat for over 300 years, being converted into a series of meeting rooms and almshouses for the poor when the monasteries were dissolved. Blackfriars was restored in the late 20th century and now houses a range of craft workshops, as well as a gallery, a restaurant and a gift shop. Visitors should look out for the exhibition detailing the history and development of the city, while the large courtyard offers seasonal theatrical events.
Open hours: Monday to Saturday - 09:00 to 17:00
Admission: free

Address: Belsay Village, Ponteland, Newcastle-upon-Tyne, Tyne and Wear, NE20 0DX, England
Tel: +44 (0)1661 881636
Belsay is home to a historic 14th-century castle, which features traces of wall paintings in its Great Hall. However, the main architectural attraction is the magnificent early 19th-century hall, which was built on neoclassical lines to resemble a Greek temple. There are numerous landscaped gardens within the 30 acres / 8 hectares of grounds, featuring many rare plant specimens. Each year, various events are staged here, such as car and motorcycle shows, and even a fun medieval tournament.
Open hours: daily, April to September - 10:00 to 18:00, October - 10:00 to 17:00, November to March - 10:00 to 16:00
Admission: charge, discounts available for children and seniors, members of the English Heritage are free