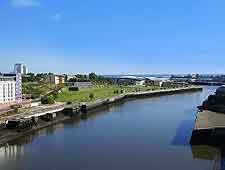 A city of change, Sunderland is no longer the centre of industry that was once thriving around its busy docks and coal mines. Instead, the city has chosen to embrace its heritage and breath new life into these previously run-down areas, transforming them into pleasant, modern city spaces and green parks, creating an undeniable new and exciting tourism buzz.

Managed by the Sunderland Arc company, the city has spent almost £200 million on countless revitalization and regeneration projects, and the results are quite clearly apparent, with pathways along the River Wear, improved shopping at the Holmeside Triangle, a landscaped inner-city garden in the Sunniside area, and trendy bars surrounding the new marina. Direct metro rail transport also means that Newcastle city centre is less than 30 minutes away from Sunderland.

Visitors will find that the Sunderland Tourist Information Centre (TIC) is located on Fawcett Street, close to the university's City Campus, the Bridges Shopping Centre, the railway station and the Argyle House School. 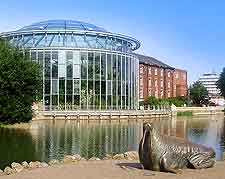 In the summer season, it is the beautiful coastal scenery that remains one of the main reasons why so many tourists choose to visit Sunderland. The neighbouring resorts of Roker and Seaburn are well known for their sandy beaches and seaside attractions, and each year in July, are the best places to watch the exhilarating aeronautical displays and flyovers during the annual Sunderland International Airshow. Those feeling energetic may like to choose between the Silksworth Sports Complex and its dry ski-slopes, or the Olympic-size swimming pool at the Aquatic Centre, which is part of the burgeoning Stadium Village complex. For evening entertainment, consider the Empire and Royalty theatres. More information about Sunderland Tourist Attractions. 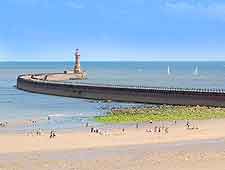 Various landmarks are ever present in the city, ranging from historic churches to gleaming modern buildings and structures. The Sunderland Minster Church of St. Michaels and All Angels is especially important, although nothing in the city attracts the crowds quite like the Stadium of Light on the Millennium Way, where important soccer matches take place, together with occasional summer concerts and events. The Elephant Tea Rooms, the ruined Hylton Castle and the nearby Washington Old Hall all add further heritage. The University of Sunderland is another notable landmark in its own way and is divided into two campuses, Chester Road and St. Peter's Way, the latter of which stands on the northern side of the River Wear and is home to the Campus nightclub (formerly the Manor Quay), which in the past has seen performances by the Arctic Monkeys and Girls Aloud. More information about Sunderland Landmarks and Monuments and Sunderland Churches. 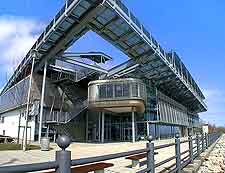 When it comes to museums in the city, the Sunderland Museum and Winter Gardens really stands out and is proud to say that it is amongst the most visited in the whole of England. Exploring the city's rich history, the Sunderland Museum contains information about the past industries of the city, including the peak times and subsequent demise. The North East Aircraft Museum (NEAM) is often another safe bet and houses one of northern England's most extensive collections of aircraft. A relatively new addition to the city's cultural scene is the National Glass Centre on Liberty Way, while at the City Library, the Northern Gallery for Contemporary Art (NGCA) encourages artists from Tyne and Wear wherever possible and comes complete with a drawing room for inspired visitors. More information about Sunderland Museums and Sunderland Art Galleries. 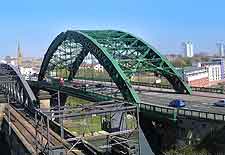 If you are planning an excursion, most tourists based in Sunderland will make Newcastle upon Tyne their first port of call, coming to soak up the culture and marvel at sights such as the Gateshead Millennium Bridge, Grey's Monument and the nearby Angel of the North. Gateshead is another popular spot, since it is where the epic Metro Centre is located, which ranks as one of Europe's largest shopping and leisure centres. The city of Durham is a similar distance from Sunderland and features a grand Norman castle, magnificent cathedral, and the curious amusement park that is Diggerland. For seaside fun further away the Roker and Seaburn, head north to the town of Whitley Bay and enjoy its gorgeous sweeping stretch of golden sand, which links the St. Mary's Island with the Cullercoats area. More information about Sunderland Attractions Nearby. 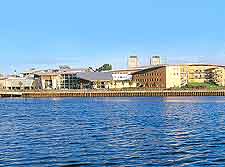 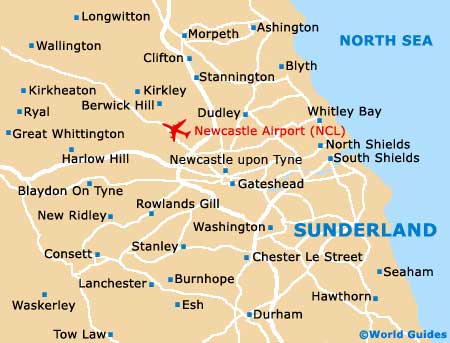