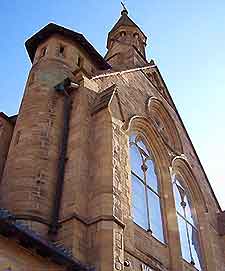 The accommodation scene in Newcastle-upon-Tyne varies greatly, with hotels in the city centre and Quayside being fairly expensive when compared to the numerous B&Bs and guest houses on Osborne Road, Sandyford Lane and around the outlying suburbs.

For budget travellers looking for cheap accommodation in Newcastle, the YHA Hostel in the affluent district of Jesmond is particularly suitable and lies to the north-east of the city centre, next to Osborne Road. Many affordable B&Bs, guest houses and hotels also reside within the Jesmond suburb, being well connected to the city centre by both the Metro and regular buses.


If you prefer cheap hotels, then consider staying at the Express By Holiday Inn Newcastle Metro Centre on Clasper Way. This popular hotel lies near to the A114 and on the western outskirts of the city, next to the River Tyne, and is conveniently near to both the Metro Riverside Park and the Metro Centre shopping complex.

The Novotel on Ponteland Road (B6918) is another familiar chain hotel and is to be found close to the Newcastle International Airport, being just off the A1 and offering more than 120 guest rooms and a leisure suite. Also near to the airport is the Britannia Hotel, which is within easy walking distance of the actual terminal.

Standing within the trendy Quayside area of Newcastle, the Staybridge Suites Hotel is situated on Buxton Street and is near to the University of Northumbria campus. Close by and just a stone's throw from Newcastle Cathedral are the Waterside and Malmaison hotels, which are near to a number of notable eateries and bars.