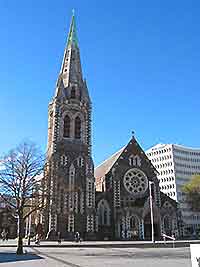 The main city on New Zealand's South Island is Christchurch, the oldest established settlement in the country. Whalers were the first Europeans to use the area as a base of operations until 1850, when a group of four ships arrived with dreams of building a city based around a cathedral and a university.

Today, it is known as the 'Garden City' for its pleasant blend of nature, recreation and trendy urban amenities.

Evidence has been found suggesting that indigenous moa-hunting Waitaha tribes lived in the area around Christchurch as far back as the middle of the 13th century. The moa, a giant flightless bird native to New Zealand (now extinct), was a source of food for the Waitaha. As was the norm on the island, intertribal warfare eventually brought about the conquest of the Waitaha by the Ngati Mamoe tribe. They were, in turn, defeated by the Ngai Tahu people, who remained in charge of the area until the first Europeans arrived in the mid-1800s.

Around 1840, an English family of whalers known as the Weller brothers purchased a large piece of land where present-day Riccarton now stands. A small group of European settlers tried to make a go of starting a colony on the location of Christchurch at this time, but abandoned their efforts to the Deans brothers in the year of 1843.

The history of Christchurch is really linked to a group of four ships chartered by the Canterbury Association. Members of the association planned to travel to the area and found a city based around a college and a cathedral, much like Christ Church in Oxford, England. The first pilgrims (approximately 800 in total) landed at Lyttelton Harbour in mid-December 1850.

Getting from Lyttelton to the proposed town site at Christchurch, however, proved much more difficult than expected. A planned road through the seaside suburb of Sumner had to be abandoned and was replaced with a pack horse trail, named the Bridle Path, to traverse the steep Port Hills between the Lyttelton Harbour and the Heathcote Valley.

Goods that could not be carried by horse were shipped by boat around the coast and up the estuary into Ferrymead. The first public railway line in New Zealand, the Ferrymead Railway, provided easier access into Christchurch when it was completed in 1863. This was followed by a railway tunnel right through the Port Hills in 1867, connecting Lyttelton with Christchurch.

Christchurch's history is also closely connected with explorations of the Antarctic. Both Ernest Henry Shackleton and Robert Falcon Scott used the city as a departure point for their expeditions. The Canterbury Museum showcases their adventures, and the city centre is home to a memorial to Scott, in the form of a statue.

Three deadly earthquakes that rattled the city in 2010 and 2011 changed the modern history of Christchurch and altered its urban landscape significantly. The first earthquake, on 4th September 2010, registered 7.1 on the Richter scale and although it didn't cause any fatalities, it severely compromised the safety and structural strength of many buildings.

A second earthquake on 22nd February 2011 was less intense, but actually caused a huge amount of damage, bringing down many tall buildings and effectively ruining the entire CBD, which was cordoned off and will have to be entirely demolished and rebuilt due to liquefaction (a phenomenon where sandy soil expands into a sludge resulting from water seepage, caused by changes in the earth's crust).

Subsequent earthquakes and tremors have blighted the city for months, making rebuilding more difficult to plan. Original historic buildings like the Christchurch Cathedral and Shag Rock were partially destroyed and just over 180 people were killed. This damage had a severe impact on the city's economy. Its plans to host some games of the World Cup Rugby in 2011 were cancelled and more than ten percent of the population have since left.