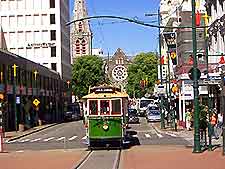 The Central Business District (CBD) of Christchurch is one of the main commercial areas on New Zealand's South Island and the historic Cathedral Square lies in the very heart of the city centre and the business district. Dominated by the famous Christ Church Cathedral, the Town Hall, the Convention Centre and the scenic Avon River, the CBD is a mixture of historic buildings, modern architecture, shopping centres, street cafés and restaurants - particularly along Oxford Terrace, also known simply as 'The Strip'.

Tourism, retail, hospitality and the spreading campus of the University of Canterbury, with more than 12,000 students, all combine to make an important contribution to the thriving economy. As a result, Christchurch has a fantastic range of shops, restaurants, hotels and tourist attractions in and around the Central Business District and has recently invested in a striking new sports and entertainment complex, a truly world-class business and convention centre, a performing arts complex and the impressive Christchurch Art Gallery. 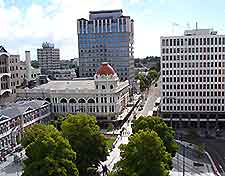 There is no actual limit on the amount of currency that you are permitted to carry with you both in and out of Christchurch, and New Zealand dollars may be exchanged for any other foreign currency using the current exchange rate.

All major credit cards are accepted throughout Christchurch, Canterbury and New Zealand, including American Express, Bankcard, MasterCard, Visa and Diners Club. Travellers' Cheques are also widely accepted and most banks will happily give a cash advance on credit cards.

Restaurants and cafés around Christchurch have a fairly strict 'no smoking' policy and local businesses, office blocks and companies are also generally 'non-smoking'. Many locals in Christchurch have recently become much more anti-smoking, so it is often a good idea to only smoke when others nearby are also smoking, or ask before lighting up.

Banks in Christchurch and nearby areas of Canterbury open Monday to Friday from 09:00 to 16:30 and plenty of overseas currency exchange facilities are also available at nearby Christchurch Airport (CHC). ATM cashpoint machines are located all around the city and provide an extremely convenient and competitive way to exchange currency.

Shops and other businesses are usually open weekdays between 09:00 and 17:30. Shops in and around Christchurch are also open on Saturdays, between 09:00 to around 12:30 or later, and many shops are now starting to open on Sundays, particularly in thte central core.