Getting Around, Christchurch Travel, Transport and Car Rental 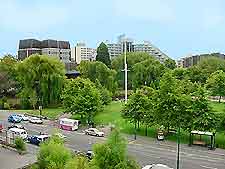 Christchurch has a good public travel and transportation system which consists of a major international airport, bus travel operated by 'Metro' services, Clarence Street Train Station in the Addington district of Christchurch - with regular trains that travel to Picton and Greymouth, and an excellent bus network which includes free daily yellow shuttle buses around Christchurch city centre.

One of the most important cities on New Zealand's South Island, Christchurch lies on State Highway 1 and is located around 350 km / 218 miles south of Picton, and Christchurch is also around 360 km / 225 north of Dunedin.

Renting a car is often the most inexpensive and preferred mode of travel and transportation for excursions outside of Christchurch. There are plenty of interesting locations near to Christchurch, which can be easily reached in less than one or two hours by car. 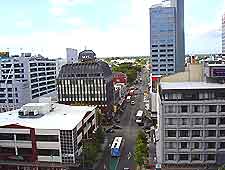 Christchurch is served by a number of major roads, with highways throughout Canterbury, and driving in the city is fairly straightforward, although peak traffic hours should always be avoided if possible (07:30 to 10:00 and 16:00 to 18:00).

With numerous central parking spaces with meters operating between 07:00 to 18:00, parking in these locations outside after 18:00 is free. A large and inexpensive car park is available in Hagley park, with free parking for the first three hours and also at weekends. 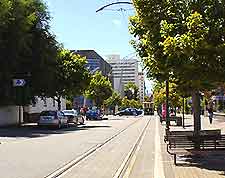 Tel: +64 (0)3 366 8855
Buses in Christchurch are efficient and inexpensive, operated by the 'Metro' from Monday to Saturday between 06:30 to 22:30, and on Sunday between 09:00 to 21:00. Departing from the City Bus Exchange, located on central Colombo Street, Christchurch bus schedules are available from the Exchange and at the main Christchurch and Canterbury Visitors' Centre on Cathedral Square. Providing regular bus travel throughout the day, alternatives include free yellow shuttle buses around the city centre, an 'After Midnight Express Service' which runs every hour from midnight until 04:00, and guided tour 'Best Attractions Direct' double decker buses. Metrocards are a particularly useful way to save money on bus travel in Christchurch.

Located on Clarence Street in Addington, on the south-western side of Christchurch, the city's train station is just 2 km / 1 mile from Christchurch city centre. With a free bus service that travels to the train station each morning, trains travel to a number of locations close to the city, including Kaikoura, Picton and Blenheim, with regular connections to Wellington, Greymouth and Arthur's Pass.

Christchurch is well pedestrianised and has a fairly compact city centre. Travel around Christchurch city centre by foot is the perfect way to sightsee, with many of Christchurch's best tourist attractions and museums located near to each other.

Cycling in Christchurch is a common way to travel around Christchurch's many recreational areas and much of central Christchurch is particularly suitable for cycling. With relatively quiet roads and a flat terrain, cycling in the Christchurch area is popular and a number of cycle-hire shops are situated off Cathedral Square.