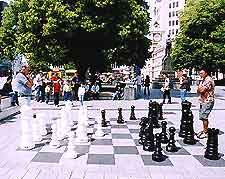 Each year, a number of cultural activities and annual events are staged within the city of Christchurch, with various seasonal festivals often being based around Cathedral Square. A true hub for entertainment is the Christchurch Arts Centre on the Worcester Boulevard, which is to be found close to the Canterbury Museum and Christ's College.

At the beginning of the year, January sees the arrival of the World Buskers Festival, when more than 50 of the world's leading street entertainers descend on Hagley Park, towards the end of the month. Highlights include the Casino Comedy Hour, the Midnight Carnivale and the Cabaret Tent. At the beginning of June, the yearly Christchurch Marathon takes to the streets, encircling the city's airport and heading along Mcleans Island Road, Avonhead Road and Ryans Road.

Further highlights on the events calendar include the New Zealand International Jazz and Blues Fest at the end of February, and the Waipara Wine and Food Celebration in late March. September is a busy time in Christchurch, with Dunkley's Great New Zealand Craft Show being held at the Addington Raceway, on the south-western side of the city, part-way between South Hagley Park and the Canterbury Agricultural Park.