Getting Around, Beijing Travel, Transport and Car Rental

Reaching Beijing is easy by air, with Beijing Capital Airport being the busiest air transport hub in China. The international airport offers direct flights to other destinations within China and Asia, as well as flights from Beijing to Europe, Australia, Africa and North and South America.

Alternatively, trains travel from Laos, Russia, Nepal and Kazakhstan. Some long-distance bus transport companies also operate services both to and from Beijing, while driving yourself around the city is not an easy option. 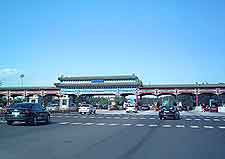 Address: Airport Road, Chaoyang District, Beijing, 100621, China, CN
Tel: +86 10 6456 3220
Beijing Capital International Airport (PEK) is the main airport serving the capital city and one of the busiest airports in the world, being the primary hub of Air China and China Xinhua Airlines. Situated 27 km / 17 miles northeast of Beijing, the airport has direct flights to many destinations worldwide, as well as servicing countless domestic routes.

A rail link providing travel between the airport and the city centre is scheduled to open in time for the 2008 Olympic Games. Until its completion, passengers can travel from Beijing Airport to different parts of the city using public bus transport and taxis. The Airport Expressway allows easy access to the airport from downtown for just a small toll fee. The 2nd Airport Expressway offers a road connection from the east, while the Northern Airport Line comes in from the northwest, and the Litian Expressway from the east. 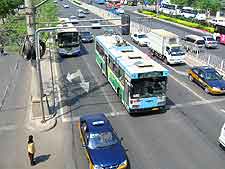 Visitors to Beijing do not normally rent cars, with the public transport system being an easier way for tourists to get between the city's attractions. Car hire prices are expensive, high deposits are required and additional fees will be payable for those who wish to take the car beyond the city's limits. Also worth noting, the roads can be difficult to navigate if you are unfamiliar with the city.

Should you wish to rent a car in Beijing, you will either need to hold a valid Chinese driving licence or provisional licence, or simply hire a driver too. Many hotels and agencies at the airport are able to arrange this for you. BCNC and Avis are amongst the reputable rental outlets at Capital Airport. Of note, an International Driving Permit is not recognised in China. 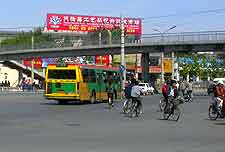 Long-distance buses travel from most major cities to Beijing. However, the cheaper buses take highway routes, which can make the journey very lengthy. We recommend that you take a deluxe service when covering long distances, as this type of transport is usually much quicker and travels via expressway.

Inner-city bus transport in Beijing is both cheap and convenient, although it can be confusing if you do not speak Chinese, since route information at bus stops is not posted in English. Buses range in comfort, with some offering air conditioning. Passengers can pay by cash or pre-paid smartcards, which give discounts. Return tickets or day passes are not available.

Buses travel from 05:00 until midnight and there are nearly 100 lines currently operating night services in Beijing, with night-time fares being 50 per cent more expensive than day time fares. Travellers are recommended to avoid travelling during rush hours, when buses can be extremely crowded.

Inner city travel can be achieved using the Beijing subway, which has four lines. Line 1 travels from Pingguoyuan to Sihui East (west to east); Line 2 runs in a loop, roughly following the 2nd Ring Road; Line 13 goes from Dongzhimen to Xizhimen in a semi-loop covering the north of the city; and the Batong Line extends from Sihui to Tuqiao.

The Beijing subway is easy to use and each station has English language maps and signs. Tickets must be purchased from a window and verified by a ticket man before you proceed to your platform. New magnetic tickets and automatic barriers are being introduced for the 2008 Olympics.

Whilst Beijing does not receive any ferry services directly, it is possible to take a ferry to another port in China and then transfer to the city by train, bus, air or car. Ferries arrive in Shanghai, Xiamen and Tanggu from Macau, Hong Kong, Japan and South Korea.

Taxis are a convenient means of getting around, especially if you don't have time to get to grips with the bus and subway systems. Beijing's taxi transport is fairly inexpensive, with taxis charging a basic starting fee, followed by an additional fee per kilometre travelled.

Various vehicles are used and there are a variety of different coloured vehicles operating as taxis all over Beijing. In addition to standard taxis, there are some more luxurious vehicles, which usually travel around the city's upmarket hotels. All 'real' taxis have a licence plate starting with the letter 'B'.

Taxis can be hired for a single trip, multiple trips or for a full day. The driver should switch the meter on as soon as you get in, and passengers are entitled to a receipt, which is useful should you want to make a complaint. Many taxi drivers in Beijing do not speak English and therefore it is useful to have your destination written in Chinese by your hotel beforehand.