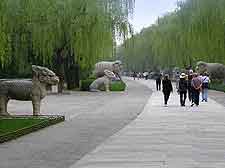 Whilst Beijing has plenty of attractions to fill most holidays, many tourists decide to venture outside of the city to explore the many surrounding sights, temples and tombs. Amongst the main attractions nearby Beijing, the enormous Tanzhe Temple stands out and is famous all around the world.

Also impressive are the breathtaking Ming Tombs, where the majority of historic Ming emperors are interred in a rather grand setting, while other noteworthy attractions include the Eastern Qing Tombs, and also the rather tranquil village of Chuandixia. 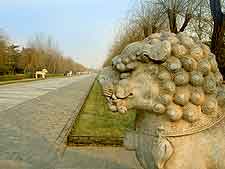 The attractions at the Eastern Qing Tombs lie just over 120 km / 75 miles north-east of Beijing and is home to the final resting places of five emperors, together with 14 empresses and over more than 100 imperial consorts. Surrounding the tombs, the mountains are also full of burial sites and include the graves of princes, dukes and many others. All but one of these impressive tombs are open to the public and the tomb of Emperor Qianlong is especially grand, featuring around 100 tonnes of silver and covering almost 1/2 square kilometre.
Open hours: April to October, daily - 08:00 to 18:00; November to March, daily - 08:00 to 17:00
Admission: charge 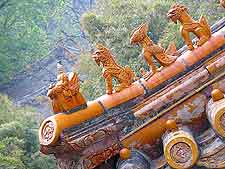 Tel: +86 010
If you head 45 km / 28 miles west of Beijing you are in for a treat. The Tanzhe Temple is the biggest of its kind in the region and is a stunning Buddhist complex, which is known to date back to the 3rd century. One of the main attractions here is the Talin Temple, which is situated next to the courtyard and close to the bus stop. The magnolia trees are also rather impressive and tend to flower towards the end of April.
Open hours: April to October, daily - 08:00 to 17:00; November to March, daily - 08:00 to 16:30
Admission: charge

Just minutes from the Tanzhe Temple and within easy driving distance of Beijing, the Jietai Temple may be smaller, but is of great importance and interest. Built towards the beginning of the 7th century and during the Tang dynasty, attractions at the Jietai Temple include a number of ancient pine trees around the entrance, such as the Nine Dragon Pine, which is known to be more than 1,000 years old.
Open hours: April to October, daily - 08:00 to 17:30; November to March, daily - 08:00 to 17:00
Admission: charge, disabled visitors and children under 1.2 metres / 3.90 feet are free

Standing around 90 km / 56 miles to the west of Beijing and offering a particularly peaceful spot, the village of Chuandixia comprises a small group of historic homes, hillside alleys and beautifully maintained orchards. Attractions within Chuandixia include a museum about Maoist graffiti, terraced areas and breathtaking views. From Beijing, it is possible to reach Chuandixia in less than three hours by bus or taxi van.