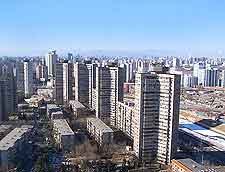 Home to a wide range of accommodation options, which range from basic two-star hotels and cheap youth hostels, to top-end luxury hotels with superb views of the cityscape, Beijing has much to commend itself.

Hotels here are particularly plentiful around downtown Beijing, where they are within walking distance of the Forbidden City area, Tiananmen Square and also the Wangfujing Dajie district.

Budget accommodation in Beijing is usually easy to find around both the Chongwen and South Chaoyang neighbourhoods, where the Eastern Morning Sun Youth Hostel is always a popular bet. Whilst not an actual member of the Hostelling International Association, the accommodation here is more than adequate and inexpensive, although a little basic and situated underground. Plenty of mid-range hotels also reside in this part of Beijing and include the Hademan Hotel along Chongwenmenwai Dajie and offers a convenient location, being close to both Beijing train station and a subway station. 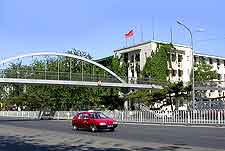 For further cheap hotels and pleasant guesthouses, consider staying in the Hai Dian, which may be a fair distance from the downtown district, but does offer good value for money. Rather more upmarket, a room at the Grand Hyatt Beijing will set you back a pretty penny, but the accommodation provided here is second-to-none. Located in the Wangfujing Dajie district, which is known for its shopping centres, the Grand Hyatt Beijing boasts four restaurants and exceptional facilities. Also located in this part of the city is the sumptuous China World Hotel and the Kerry Centre Hotel.

The recently opened Beijing Saga International Youth Hostel offers modern accommodation in the city's centrally located Dongcheng district, standing along the noteworthy Shijia Hutong. A number of hotel chains also reside in the Dongcheng area and include both the Novotel and the considerably more expensive Peninsula.

Further accommodation options can be found in the Chaoyang district, which lies on the eastern side of Beijing and contains two popular youth hostels, self-catering apartments and cheap hotels, all of which are close to the lively nightspots on nearby Sanlitun. The Haidian and Xicheng districts are known for their top-end hotels, which include both the Marriott and the Shangri-La Hotel, while further afield, the Holiday Inn Lido has good access to the airport, and is extremely popular, featuring its own shopping mall.