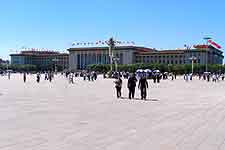 Aside from the most prominent landmarks around the city, such as the Forbidden City and the Great Wall of China, Beijing has an enormous wealth of lesser-known structures and important, historical monuments. Many of these landmarks are equally worthy of attention and warrant searching out.

Taking prominent positions in Beijing are the landmarks of Tiananmen Square, the Mao Zedong Mausoleum, the Great Hall of the People, and also the Monument to the People's Heroes, all of which are within walking distance of each other. 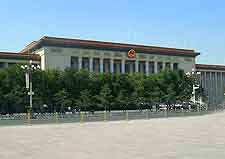 Great Hall of the People

Address: Tiananmen Square, Dong Cheng, Beijing, 100009, China, CN
Taking up a prime location on the western edge of Tiananmen Square, this hall is used by the government for legislative and ceremonial purposes. Built in the late 1950s and perhaps not one of Beijing's most architecturally pleasing buildings, the Great Hall of the People is nevertheless the site of most day-to-day government activities and appears on CNY 100 banknotes.
Open hours: not open to the public
Admission: no charge

Address: Di'anmen Street, Beijing, China, CN
Also known as the Drum Tower and the Bell Tower respectively, these monuments were originally constructed for musical reasons, and later for indicating the time. No longer used for telling time, the bells still ring and the towers are open as a tourist attraction in their own right.
Open hours: daily
Admission: no charge 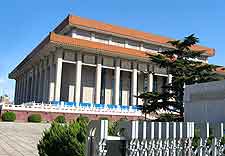 Address: Tiananmen Square, Chongmen, Beijing, 100006, China, CN
Tel: +86 010 6513 2255
In commemoration of the controversial founder of the People's Republic of China, the Mao Zedong Mausoleum is an enormous structure, taking a prominent position at the centre of Tiananmen Square, which is the symbolic heart of China. Still revered by many Chinese today, visitors can pass by his glass coffin to catch a glimpse of the corpse.
Open hours: daily
Admission: charge 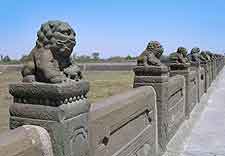 Address: Yongding River, Wanping, Feng Tai, Beijing, 100072, China, CN
Tel: +86 010 8516 2288
This rather appealing marble bridge is over 260 metres / 853 feet in length and spans the Yongding River, being constructed at the end of 12 century, and is the most historic bridge in the Beijing area. Amongst the bridge's main attractions are 485 lions, each of which has been carved from stone and is completely unique. Providing access across the Yongding River for 800 years, the granite stone Marco Polo Bridge is one of Beijing's indispensable landmarks. Characterised by 11 arches and many lion statues lining both sides, with no two lions alike, Marco Polo Bridge played a historical role as a key point of assault on the city, when Japanese forces invaded in 1937 and the bridge became a battle zone. At night-time, local legend purports that the lions all come to life.
Open hours: daily - 08:00 to 17:00
Admission: charge 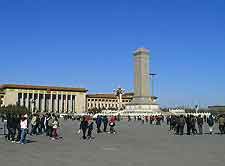 Monument to the People's Heroes

Address: Tiananmen Square, Dong Cheng, Beijing, 100009, China, CN
This ten-storey obelisk is famous in Beijing and is a national monument. The structure was built in 1958 to commemorate those who dedicated and lost their lives in the revolutionary struggle, which resulted in the formation of the People's Republic of China. The bas-reliefs at the base of the Monument to the People's Heroes depict famous scenes from the struggle, while the front of the obelisk features an inscription in Mao Zedong's handwriting that translates as 'Eternal glory to the people's heroes!'.
Open hours: daily - 24 hours
Admission: no charge