Stretching from the Front Gate and close to the landmark on Tiananmen Square, Beijing's Dashilar shopping district contains an especially diverse mixture of outlets, including silk shops, large department stores, herbal specialists, clothing stores and food shops, amongst others.


Other prominent shopping districts in Beijing include the rather affluent areas of Sanlitun and Jianguomenwai, where vast shopping malls and open-air markets can all be found. The Liulichang district of Beijing is known for its specialist shopping and contains a huge selection of antique stores close to Dashilar, although do be careful when shopping here as many of the so-called antiques are fake and not as they seem. 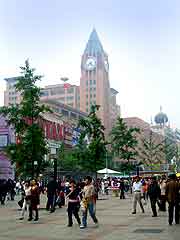 Typically Chinese, shopping hours in Beijing are long and most shops in the city are open between 09:00 to 21:00, or 10:00 to 22:00, Monday to Sunday. This means that you can virtually shop whenever you want, with vast department stores, shopping centres and their food courts all often busy during the evenings, from 17:00 to 18:00 onwards, as office workers finish their day. However, some shopping centres do open between 08:30 to 09:00, closing as early as 17:00 or 17:30, such as the Oriental Plaza off Dong Chang An Jie.

A particularly memorable shopping experience for those visiting Beijing is the Panjiayuán Market, off Dongsanhuan Nanlu, which also goes by the name of the Dirt Market or the Sunday Market. Open at the weekends, this is a huge market where you will find arts and crafts, antiquities, many treasures and a host of collectibles, attracting in excess of 50,000 visitors. Shopping at Beijing's outstanding Xiushui Silk Market on the Jianguomenwai Dajie is also not to be missed and is located in close proximity to the famous Friendship Store.

Of course, for some serious shopping in Beijing, you will need to visit some of the many enormous, modern shopping malls. With a wealth of impressive anchor stores, spacious food courts and modern amenities, the most popular are listed below.