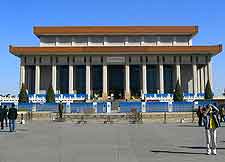 A number of truly superb art galleries exist around the city of Beijing and are not to be overlooked in place of more 'touristy' attractions. Particularly outstanding is the National Art Museum of China, which can be found along Beijing's Wu Si Street and is housed in a beautiful pagoda-style building, being an impressive landmark in its own right.

Also worth a visit is the Palace Museum, where a mixture of historical artefacts and art works await.

Address: Forbidden City, Beijing, China, CN
Tel: +86 010 6520 1114
Focusing on the priceless artworks and artefacts of the Forbidden City, Beijing's Palace Museum is one of the leading museums in China. Learn about the Ming and Qing dynasties which inhabited the palace, the latter being removed from power and consequently from the palace in 1924. Later, the priceless collection of over a million ancient art works were moved to Shanghai at the onset of WWII, to avoid them falling into enemy hands. Having been returned after the war, visitors can now once again enjoy these pieces, displayed in their original home.
Open hours: daily - 08:30 to 16:30, seasonal variations apply
Admission: charge

Address: Wu Si Street, Beijing, China, CN
Tel: +86 010 64017076
With a focus on contemporary Chinese art, the National Art Museum of China is the largest art museum in the whole of the country and features enormous exhibition halls, displaying some of China's most prized artworks. This grand building was completed in 1962 and is one of the Ten Great Constructions that were built to mark the 10th anniversary of the People's Republic of China.
Open hours: Tuesday to Sunday - 09:00 to 16:00
Admission: charge